Preventing the introduction and establishment of forest invasive alien species (FIAS) such as the Asian gypsy moth (AGM) is a high-priority goal for countries with extensive forest resources such as Canada. The name AGM designates a group of closely related Lymantria species (Lepidoptera: Erebidae: Lymantriinae) comprising two L. dispar subspecies (L. dispar asiatica, L. dispar japonica) and three closely related Lymantria species (L. umbrosa, L. albescens, L. postalba), all considered potential FIAS in North America. Ships entering Canadian ports are inspected for the presence of suspicious gypsy moth eggs, but those of AGM are impossible to distinguish from eggs of innocuous Lymantria species. To assist regulatory agencies in their identification of these insects, we designed a suite of TaqMan® assays that provide significant improvements over existing molecular assays targeting AGM. The assays presented here can identify all three L. dispar subspecies (including the European gypsy moth, L. dispar dispar), the three other Lymantria species comprising the AGM complex, plus five additional Lymantria species that pose a threat to forests in North America. The suite of assays is built as a “molecular key” (analogous to a taxonomic key) and involves several parallel singleplex and multiplex qPCR reactions. Each reaction uses a combination of primers and probes designed to separate taxa through discriminatory annealing. The success of these assays is based on the presence of single nucleotide polymorphisms (SNPs) in the 5’ region of mitochondrial cytochrome c oxidase I (COI) or in its longer, 3’ region, as well as on the presence of an indel in the “FS1” nuclear marker, generating North American and Asian alleles, used here to assess Asian introgression into L. dispar dispar. These assays have the advantage of providing rapid and accurate identification of ten Lymantria species and subspecies considered potential FIAS.

This study focuses on the development of a molecular detection tool to identify several species and subspecies of Asian gypsy moths by analyzing egg samples. These tests are faster and more reliable than those that have been developed in the past.

The term “Asian gypsy moth” refers to a group of five species and subspecies of moths that originate from Asia. These exotic insects represent a threat to Canadian forests if they succeed in introducing themselves. Damage occurs while the insects are at the larval stage. One method used to reduce the risk of accidental introduction of the moths consists in inspecting foreign ships to detect the presence of egg clusters. However, it is impossible to differentiate Asian gypsy moth eggs from those of closely-related insects, which are inoffensive, based solely on morphological criteria. Exotic insects are often introduced as a result of human activities, such as transporting material over long distances. 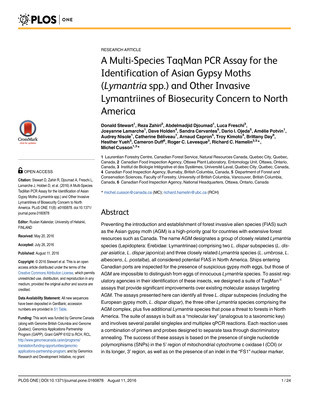