Giant silk moths (Lepidoptera: Saturniidae) are typically not well represented as larvae or adults in community level inventories of Lepidoptera and as a result little is known about their population dynamics. Furthermore, in recent years many species of silk moths appear to have experienced population declines. Volatile sex pheromones are powerful sampling tools and are used in operational conservation and monitoring programs. Coupled gas chromatography-electroantennogram detection and gas chromatography-mass spectrometric analyses of extracts from pheromone glands of female luna moths supported the identification of (6E,11Z)-6,11-octadecadienal (E6,Z11-18:Ald), (E)-6-octadecenal (E6-18:Ald) and (Z)-11-octadecenal (Z11-18:Ald) as the compounds in extracts that elicited responses from antennae of males. These identifications were confirmed by synthesis, followed by field testing of blends of the synthetic compounds in field trials in Ontario, Canada and Kentucky, USA. Male moths were attracted to synthetic E6,Z11-18:Ald as a single component, but the attraction was enhanced by addition of the two minor components E6-18:Ald and Z11-18:Ald, suggesting that the luna moth pheromone consists of these three components. 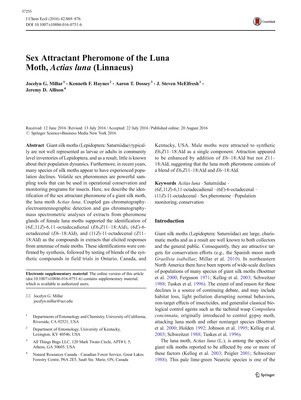