The invasive woodwasp Sirex noctilio (Hymenoptera: Siricidae) has been moved from Eurasia into regions in the Southern Hemisphere, where extensive tree mortality has occurred in pines (Pinus spp.) introduced for forestry. More recently this woodwasp was found in northeastern North America, where pines are native, and it is a species of concern due to the economic importance of pines. Understanding the genetic diversity of North American S. noctilio points to new areas of inquiry, particularly regarding the ability of parasitic nematodes to sterilize woodwasps, which could provide control methods in the US and/or Canada. We investigated the genetic diversity of 924 S. noctilio from nine populations from New York and Pennsylvania (US), Ontario (CA), and Queensland (AU) using nine microsatellite loci. To avoid inflating the number of populations estimated by Bayesian inference, we measured the full-sibling relationships of woodwasps within 13 trees and removed all but one member of each full-sib family from the genetic analysis, resulting in a final sample size of 741 S. noctilio. Within a tree, on average 39% of woodwasps did not have a full sibling, and there were 5.6 families with at least two full-sibling members per tree. The mean family size across trees was 1.9 when single offspring (i.e., no full siblings) were included. Given the short time span since invasion, variation within North American S. noctilio is likely due to differences among founding genotypes. Genetic analyses support the hypothesis that at least two separate introductions occurred. Within North America, genetic distance measures were greatest between a site in southwestern Ontario and all other sites, suggesting that this population could represent a separate introduction event. Two methods of Bayesian clustering also support this idea; they detected 4 or 5 distinct genetic clusters with little admixture between the southwestern Ontario site and other North American populations. The wasps from Australia, where biological control with nematodes has been successful, showed low genetic diversity and clustered with the southwestern Ontario population in one out of two Bayesian analyses. Within the Ontario subset of samples, high woodwasp activity level (i.e., attack and mortality of trees) was associated with one genetic cluster more strongly than another. Population variation should be taken into account in studies of S. noctilio spread and management within North America.

This study investigated the genetic diversity of almost 1,000 individual Sirex noctilio from 9 populations in the USA, Canada and Australia. The results of the genetic analyses support the hypothesis that at least two separate introductions have occurred in North America. 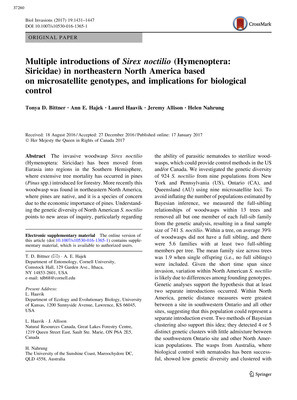