Several studies have observed that trap captures of longhorned beetles (Coleoptera: Cerambycidae) can be increased by treating the surface of intercept traps with a lubricant. In addition to being expensive these treatments can alter the spectral properties of intercept traps when applied neat. These surface treatments, particularly Fluon®, are commonly used diluted as a low friction coating to prevent insects from climbing out of rearing containers. The purpose of this study was to examine the effect of diluting Fluon on the spectral properties of treated corrugated plastic traps and the capture of longhorned beetles including Monochamus scutellatus, M. mutator and M. notatus. Intercept panel traps were baited with attractant semiochemicals and treated with either undiluted (i.e., 100%) Fluon, a 1:1 mixture of Fluon and water (50%), a 1:9 mixture of Fluon and water (10%) or untreated. There were no obvious differences in the relative reflectance of untreated black Coroplast® plastic or black Coroplast plastic treated with 50% or 10% Fluon. Traps treated with 100% Fluon had similar patterns of peak reflectance to the other treatments but overall had higher relative reflectance. In general, no effect of diluting the Fluon was observed for male or female Monochamus scutellatus or M. mutator but an effect of treating traps with Fluon was observed. Similar results were observed for the combined captures of Clytus ruricola, Cyrtophorus verrucosus, Megacyllene caryae, Xylotrechus colonus, Neoclytus acuminatus, Neoclytus mucronatus, and Phymatodes testaceus. No treatment effect was observed for M. notatus. 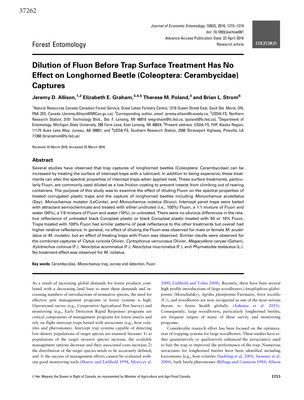