Three main hypotheses have been postulated over the past century to explain the outbreaking population dynamics of eastern spruce budworm, Choristoneura fumiferana (Clemens). The Silviculture Hypothesis first arose in the 1920s, with the idea that outbreaks were driven by forestry practices favoring susceptible softwood species. In the 1960s, it was proposed that populations were governed by Multiple Equilibria, with warm weather conditions releasing low-density populations from the regulatory control of natural enemies. Dispersal from outbreak foci, or “epicenters,” was seen as causing widespread outbreaks that eventually collapsed following resource depletion. However, in the 1980s, following the re-analysis of data from the 1940s outbreak in New Brunswick, this interpretation was challenged. The alternative Oscillatory Hypothesis proposed that budworm population dynamics were governed by a second-order density-dependent process, with oscillations being driven by natural enemy–victim interactions. Under this hypothesis, weather and resource availability contribute to secondary fluctuations around the main oscillation, and weather and moth dispersal serve to synchronize population cycles regionally. Intensive, independent population studies during the peak and declining phases of the 1980s outbreak supported the principal tenet of the Oscillatory Hypothesis, but concluded that host plant quality played a more important role than this hypothesis proposed. More recent research on the early phase of spruce budworm cycles suggests that mate-finding and natural-enemy-driven Allee effects in low-density populations might be overcome by immigration of moths, which can facilitate the onset of outbreaks. Even more recent research has supported components of all three hypotheses attempting to explain spruce budworm dynamics. In the midst of a new rising outbreak (2006-present), we discuss the evolution of debates surrounding these hypotheses from a historic perspective, examine gaps in current knowledge, and suggest avenues for future research (e.g., intensive studies on low-density populations) to better understand and manage spruce budworm populations.

In this article, the researchers provide an overview of the evolution of the debate over theories explaining spruce budworm outbreaks in eastern Canada. Three hypotheses have been put forward: 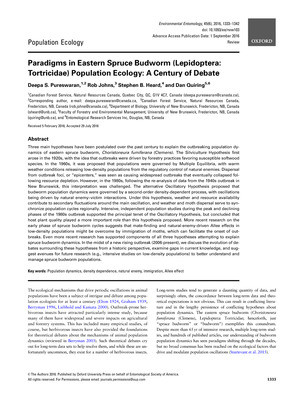