The Ecosystem Management Emulating Natural Disturbances (EMEND) project tests the hypothesis that varying levels of green tree retention maintain and retain forest biodiversity better than conventional clear-cutting. We studied epigaeic spiders to assess biodiversity changes 2, 5, and 10 yr following a range of partial retention harvests (clear-cut, 10–75% retention) and unharvested controls in four boreal mixedwood cover types. A total of 56371 adult spiders representing 220 species was collected using pitfall traps. Lasting effects on forest structure were proportional to harvest intensity. These changes strongly influenced spider richness, abundance, and species composition, as well as assemblage recovery. Distinctive assemblages were associated with disturbance level, especially with partial harvests (≤50% retention), and these were dominated by open-habitat species even 10 yr after harvest. Assemblages were more similar to those of controls in the highest (75%) retention treatment, but significant recovery toward the structure of pre-disturbance assemblages was not detected for any prescription in any cover type. Although early responses to retention harvest suggested positive effects on spider assemblages, these are better explained as lag effects after harvest because assemblages were less similar to those of unharvested controls 5 yr post-harvest, and only minor recovery was observed 10 yr following harvest. Retention of forest biodiversity decreased over time, especially in conifer stands and the lower (10–50%) retention treatments. Overall, retention harvests retained biodiversity and promoted landscape heterogeneity somewhat better than clear-cutting; however, there was a clear gradient of response and no retention “threshold” for conservation can be recommended on the basis of our data. Furthermore, results suggest that retention harvest prescriptions should be adjusted for cover type. We show that low retention ameliorated impacts in broadleaved forests characteristic of earlier stages in mixedwood succession, but only higher retention was associated with less impact in successionally older conifer forests. Although these short-term responses (10 yr) of spider assemblages support use of retention harvests, understanding the true conservation merit of these practices, relative to conventional approaches, requires evaluation over longer time scales, with work more focused on recovery of biodiversity than on its preservation after harvest.

A recent approach to forestry, called “retention forestry,” involves leaving trees standing after harvesting in a way that emulates natural processes such as wildfire. This approach is hoped to maintain biodiversity and allow species to repopulate forests when they grow back. This study looked at the effect of harvesting varying percentages of trees in forest stands on conservation of spiders at the Ecosystem Management Emulating Natural Disturbance research site in northwestern Alberta. Ten years after harvest, spider species had not returned to pre-harvest numbers or species diversity in any of the harvested stands. Retention forestry helped conserve the spiders much better than clear-cutting, but conservation of spiders depended on the percentage of trees left after harvest. It also depended on the type of forest – even a low proportion of trees left after harvest had a positive effect on conservation in broadleaved forests (typically younger forests), whereas high percentages of trees were needed to conserve spiders in coniferous forests (typical of older forests). 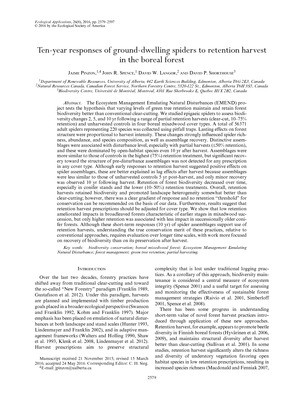