The boreal forest of Alberta, Canada, is under pressure from a rapid expansion of the wildland–human interface driven by natural resources exploitation. The specific impact of these changes on area burned remains poorly understood. We addressed this issue by modelling area burned for the 1980–2010 period using variables accounting for various anthropogenic effects. We hypothesise that an ecological frontier exists in the areas of intermediate to low human influence in northern Alberta, which implies a new influx of human-caused ignitions coinciding with continuous flammable vegetation, hence promoting area burned. Using a statistical control approach, we assessed the importance of each anthropogenic variable by adding them to a biophysical regression model. Our results show that there is a diversity of responses of area burned to the different anthropogenic factors considered. Distance to the transportation network, human footprint and density of the energy network significantly improved the model predictions. The area burned in the ecological frontier showed clusters of higher predictions by anthropogenic models, which supports our hypothesis of an ecological frontier and suggests that human and natural ignitions have an additive, albeit temporary, effect on landscape fire susceptibility. 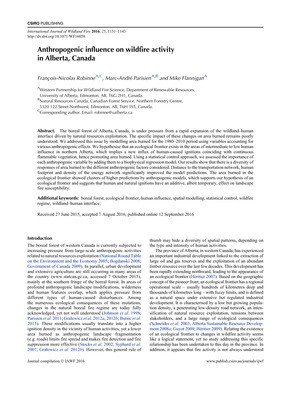