Fire is the main disturbance in North American coniferous boreal forests. In Northern Quebec, Canada, where forest management is not allowed, the landscape is gradually constituted of more opened lichen woodlands. Those forests are discontinuous and show a low regeneration potential resulting from the cumulative effects of harsh climatic conditions and very short fire intervals. In a climate change context, and because the forest industry is interested in opening new territories to forest management in the north, it is crucial to better understand how and why fire risk varies from the north to the south at the transition between the discontinuous and continuous boreal forest. We used time-since-fire (TSF) data from fire archives as well as a broad field campaign in Quebec’s coniferous boreal forests along four north-south transects in order to reconstruct the fire history of the past 150 to 300 years. We performed survival analyses in each transect in order to (1) determine if climate influences the fire risk along the latitudinal gradient; (2) fractionate the transects into different fire risk zones; and (3) quantify the fire cycle—defined as the time required to burn an area equivalent to the size of the study area—of each zone and compare its estimated value with current fire activity. Results suggest that drought conditions are moderately to highly responsible for the increasing fire risk from south to north in the three westernmost transects. No climate influence was observed in the last one, possibly because of its complex physical environment. Fire cycles are shortening from south to north, and from east to west. Limits between high and low fire risk zones are consistent with the limit between discontinuous and continuous forests, established based on recent fire activity. Compared to the last 40 years, fire cycles of the last 150–300 years are shorter. Our results suggest that as drought episodes are expected to become more frequent in the future, fire activity might increase significantly, possibly leading to greater openings within forests. However, if fire activity increases and yet remains within the range of variability of the last 150–300 years, the limit between open and closed forests should stay relatively stable.

In this study on the fire history of Northern Quebec, the researchers showed that:

Therefore, these results suggest that more frequent drought episodes and increased fire activity would create more openings in Northern Quebec’s forests. However, if the fire risk remains similar to that of the past, the current limit between continuous and discontinuous forests should not change. The forest is discontinuous in Northern Quebec. The lichen tundra does not regenerate well due to the cumulative effect of adverse climate conditions and the short intervals between fires. With the anticipated climate change and the forest industry’s interest in tapping into these new territories, it is important to gain a better understanding of how and why the fire risk varies from the north to the south and where the forest transitions from continuous to discontinuous. 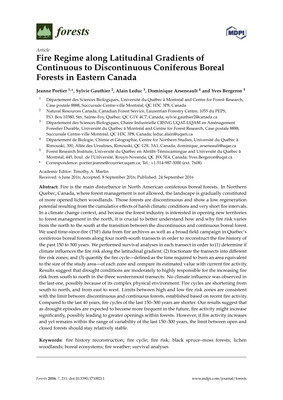