Tranosema rostrale (Brischke) (Hymenoptera: Ichneumonidae) is an important parasitoid of low-density spruce budworm Choristoneura fumiferana (Clemens) (Lepidoptera: Tortricidae) populations. To investigate the effectiveness of this parasitoid in attacking low-density spruce budworm populations, we conducted a detailed laboratory study on its reproductive biology and behavior including mating behavior, potential fecundity, longevity, host searching, and oviposition behavior. We found that the occurrence of mating increases with the number of males present in the cage but that it drastically decreases when females mated previously. Females may mate multiple times with different males in one breeding session and mating duration is significantly longer when a male mates the second time with the same female. Dissections of T. rostrale’s oviducts showed that it is a synovigenic species emerging with about 17 % of its lifetime egg load and develops most of its eggs in the first three days after emergence at 20 °C. Sugar, but not pollen, significantly increased the insect’s longevity compared to water. Spruce budworm larvae, silk from larvae and damaged balsam fir foliage triggered probing in T. rostrale females significantly more often than larval feces. The sequence of the parasitoid’s behaviors leading to successful attack is described as antennation, probing, insertion of the ovipositor, oviposition, and subsequent disinterest or resuming of the sequence. Defense mechanisms of the host larva such as vigorous movements, biting, and/or regurgitation and behavioral countermeasures by T. rostrale are described in detail.

This study explains the behaviour and reproductive mechanisms of the Tranosema rostrale wasp, a parasitoid of the spruce budworm (SBW). The researchers observed its mating behaviour, fecundity, longevity, the way it finds its host and its method for parasitizing SBW larvae.

This work aimed to provide a clearer understanding of this wasp’s reproductive success and its high parasitism rate during low SBW infestation periods. 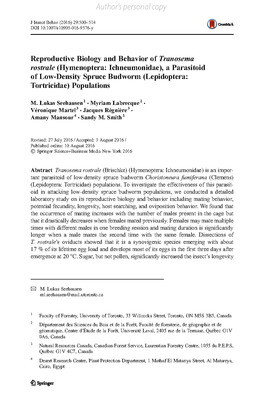