Accurately detecting signatures of local adaptation using genetic-environment association (GEAs) requires controlling for neutral patterns of population structure to reduce the risk of false positives. However, a high degree of collinearity between climatic gradients and neutral population structure can greatly reduce power, and the performance of GEA methods in such case is rarely evaluated in empirical studies. In this study, we attempted to disentangle the effects of local adaptation and isolation by environment (IBE) from those of isolation by distance (IBD) and isolation by colonization from glacial refugia (IBC) using range-wide samples in two white pine species. For this, SNPs from 168 genes, including 52 candidate genes for growth and phenology, were genotyped in 133 and 61 populations of Pinus strobus and P. monticola, respectively. For P. strobus and using all 153 SNPs, climate (IBE) did not significantly explained among-population variation when controlling for IBD and IBC in redundancy analyses (RDAs). However, 26 SNPs were significantly associated with climate in single-locus GEA analyses (Bayenv2 and LFMM), suggesting that local adaptation took place in the presence of high gene flow. For P. monticola, we found no evidence of IBE using RDAs and weaker signatures of local adaptation using GEA and FST outlier tests, consistent with adaptation via phenotypic plasticity. In both species, the majority of the explained among population variation (69 to 96%) could not be partitioned between the effects of IBE, IBD, and IBC. GEA methods can account differently for this confounded variation, and this could explain the small overlap of SNPs detected between Bayenv2 and LFMM. Our study illustrates the inherent difficulty of taking into account neutral structure in natural populations and the importance of sampling designs that maximize climatic variation, while minimizing collinearity between climatic gradients and neutral structure. 

In this study, researchers set out to separate the effects of local adaptation (isolation by environment) from those resulting from neutral processes such as isolation by distance and isolation by colonization of glacial refugia on the genetic variation of two pine species: western white pine and eastern white pine.

All of these effects partly account for the genetic variation between populations, but it is difficult to assess their individual impact. The researchers have nonetheless identified 25 genes in eastern white pine and 18 genes in western white pine that demonstrate local adaptation to climate. 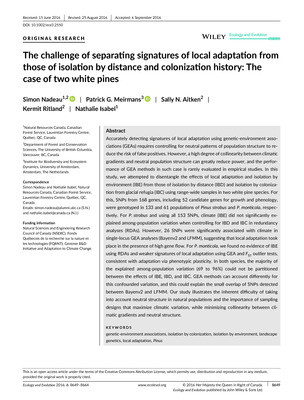