The use of functional traits to describe community structure is a promising approach to reveal generalities across organisms and ecosystems. Plant ecologists have demonstrated the importance of traits in explaining community structure, competitive interactions as well as ecosystem functioning. The application of trait-based methods to more complex communities such as food webs is however more challenging owing to the diversity of animal characteristics and of interactions. The objective of this study was to determine how functional structure is related to food web structure. We consider that food web structure is the result of 1) the match between consumer and resource traits, which determine the occurence of a trophic interaction between them, and 2) the distribution of functional traits in the community. We implemented a statistical approach to assess whether or not 35 466 pairwise interactions between soil organisms are constrained by trait-matching and then used a Procrustes analysis to investigate correlations between functional indices and network properties across 48 sites. We found that the occurrence of trophic interactions is well predicted by matching the traits of the resource with those of the consumer. Taxonomy and body mass of both species were the most important traits for the determination of an interaction. As a consequence, functional evenness and the variance of certain traits in the community were correlated to trophic complementarity between species, while trait identity, more than diversity, was related to network topology. The analysis was however limited by trait data availability, and a coarse resolution of certain taxonomic groups in our dataset. These limitations explain the importance of taxonomy, as well as the complexity of the statistical model needed. Our results outline the important implications of trait composition on ecological networks, opening promising avenues of research into the relationship between functional diversity and ecosystem functioning in multi-trophic systems.

This paper seeks to develop a theoretical approach to comprehend the complexity of soil food webs and simplify reality to ease its manipulation. Synthesizing the variety of responses of the different organisms of a community to changes in ecosystem processes is a major challenge in biodiversity science. One approach for capturing multiple taxa and their associated processes is to consider ecological communities as networks of interacting species and processes. Using empirical and literature data of species characteristics for a broad range of soil fauna (from microbes to macro-arthropods), we were able to determine the occurrence of interactions between consumers and their prey within the soil food web. From there, we were able to analyze how species characteristics within the community are related with food web structure. We found that the occurrence of paired interactions in the food web is well predicted by matching characteristics of resource and consumer. We also found that properties of food webs are correlated to the types and range of species characteristics. These results show how a trait-based approach can be an efficient way of understanding a species role within complex food webs. 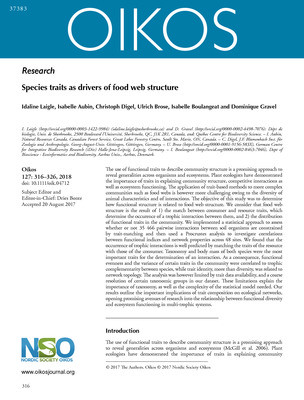