Tree species responses to climate change will be greatly influenced by their evolutionary potential and their phenotypic plasticity. Investigating tree-rings responses to climate and population genetics at the regional scale is crucial in assessing the tree behavior to climate change. This study combined in situ dendroclimatology and population genetics over a latitudinal gradient and compared the variations between the two at the intra- and inter-population levels. This approach was applied on the northern marginal populations of Thuja occidentalis (eastern white-cedar) in the Canadian boreal forest. We aimed first to assess the radial growth variability (response functional trait) within populations across the gradient and to compare it with the genetic diversity (microsatellites). Second, we investigated the variability in the growth response to climate at the regional scale through the radial growth-climate relationships, and tested its correlation with environmental variables and population genetic structure. Model selection based on the Akaike Information Criteria revealed that the growth synchronicity between pairs of trees of a population covariates with both the genetic diversity of this population and the amount of precipitation (inverse correlations), although these variables only explained a small fraction of the observed variance. At the regional scale, variance partitioning and partial redundancy analysis indicate that the growth response to climate was greatly modulated by stand environmental variables, suggesting predominant plastic variations in growth-response to climate. Combining in situ dendroclimatology and population genetics is a promising way to investigate species' response capacity to climate change in natural stands. We stress the need to control for local climate and site conditions effects on dendroclimatic response to climate to avoid misleading conclusions regarding the associations with genetic variables.

The results of this research show that combining tree-ring climatology studies and population genetics studies is a promising way of analyzing the trees’ capacity to respond to climate change in natural stands. At the regional scale, analyses indicate that growth response to climate is largely related to the stand’s environmental variables, e.g., the amount of seasonal precipitation and the temperature regime. Analyses also show that the effects of genetic variables are sometimes mistaken for those of environmental variables, but the former show a stronger correlation with regards to their response to summer droughts and spring temperatures.

This research focused on populations of Eastern white cedar of Canada’s boreal forests. First, the researchers studied growth rings in order to assess the variability in radial growth among populations along a latitudinal gradient; they compared this variability to genetic diversity. Second, they examined growth variability in light of climate at the regional scale and tested its correlation with environmental variables and the population’s genetic structure. 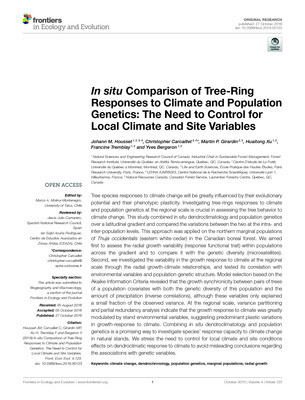