Pissodes irroratus Reitter, 1899 (Coleoptera, Curculionidae, Molytinae) is a species from east Russia newly discovered in Europe in various locali-ties in the Alps (France, Switzerland, and Italy). We provide here a description of morphological characters and molecular data (mitochondrial standard barcode gene) for this species. We also give diagnostic characters to distinguish this species from its closest relative, Pissodes harcynia (Herbst, 1795), and other west palearctic species of the genus.

Weevils are insect pests that can pose a threat to tree species. Identification of pest species is important information in their management. This paper concerns identification of a previously misidentified weevil species in Europe. The authors examined weevil specimens in various European collections as well as weevils collected in 2015 at various locations in the Alps mountain range. They found that many weevils thought to be one common species were actually another that had previously been identified only in eastern Russia, 6000 km away. It is unclear how long these weevils have been in the Alpine regions west of their previously identified range. It could be that they were a pre-Ice Age species that survived the glaciation of Europe in pockets, or people may have inadvertently brought them from Russia to the Alps at some point. The Alpine specimens have been found only at elevations of 1230-1400 metres in the Western Alps to date. 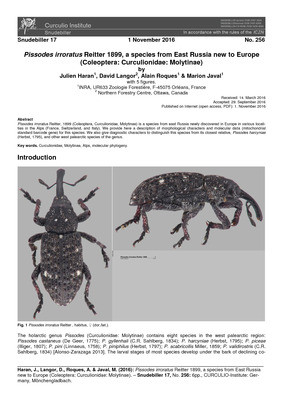