In western North America, the current outbreak of the mountain pine beetle (MPB) and its microbial associates has destroyed wide areas of lodgepole pine forest, including more than 16 million hectares in British Columbia. Grosmannia clavigera (Gc), a critical component of the outbreak, is a symbiont of the MPB and a pathogen of pine trees. To better understand the interactions between Gc, MPB, and lodgepole pine hosts, we sequenced the ∼30-Mb Gc genome and assembled it into 18 supercontigs. We predict 8,314 protein-coding genes, and support the gene models with proteome, expressed sequence tag, and RNA-seq data. We establish that Gc is heterothallic, and report evidence for repeat-induced point mutation. We report insights, from genome and transcriptome analyses, into how Gc tolerates conifer-defense chemicals, including oleoresin terpenoids, as they colonize a host tree. RNAseq data indicate that terpenoids induce a substantial antimicrobial stress in Gc, and suggest that the fungus may detoxify these chemicals by using them as a carbon source. Terpenoid treatment strongly activated a ∼100-kb region of the Gc genome that contains a set of genes that may be important for detoxification of these host-defense chemicals. This work is a major step toward understanding the biological interactions between the tripartite MPB/fungus/forest system. 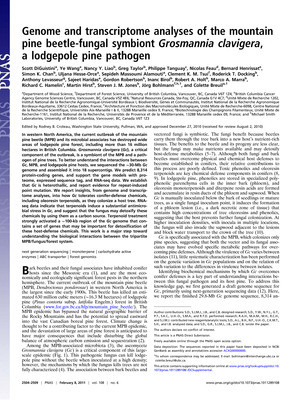