Conifer-feeding spruce budworms emerge from overwintering sites as small larvae in early spring, several days before budburst, and mine old needles. These early-emerging larvae suffer considerable mortality during this foraging period as they disperse in search of available, current-year buds. Once buds flush, surviving budworms construct feeding shelters and must complete maturation before fresh host foliage senesces and lignifies later in the summer. Late-developing larvae suffer greater mortality and survivors have lower fecundity when feeding on older foliage. Thus, there is a seasonal trade-off in fitness associated with host synchrony: early-emerging budworms have a greater risk of mortality during spring dispersal but gain better access to the most nutritious foliage while on the other hand late-emerging larvae incur a lower risk during the initial foraging period but must contend with rapidly diminishing resource quality at the end of the feeding period. We investigate the balance that results from these early-season and late-season synchrony fitness trade-offs using the concept of the phenological window. Parameters associated with the variation in the phenological window are used to estimate generational fitness as a function of host-plant synchrony. Because defoliation modifies these relationships, it is also included in the analysis. We show that fitness trade-offs characterizing the phenological window result in a robust synchrony relationship between budworm and host-plant over a wide geographic range in southern British Columbia, Canada.

In this study, the researchers examined the synchrony between the western spruce budworm and its host, Douglas fir, for the entire period starting with the moment larvae emerge in the spring, through their feeding period, until they pupate in midsummer (concept of a “phenological window”).

The researchers showed that variation in synchrony between the emergence of budworm larvae in the spring and the availability of current-year buds has a lesser impact on budworm survival than expected. This is explained by early-emerging larvae losses being compensated by an increased survival rate of last instar larvae and greater fecundity in adults. Larvae that emerge early and survive therefore have access to an abundance of nutritious foliage.

The concept of a “phenological window” can be used to examine differences in host tree sensitivity or the impact of climate change on such sensitivity due to the seasonality of the host tree and herbivore insect. 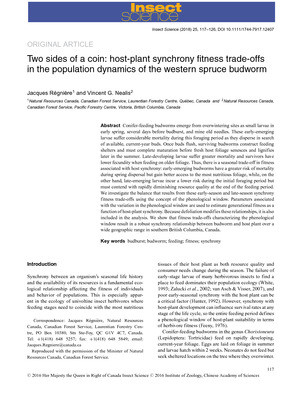