Partial cutting is thought to be an alternative to achieve sustainable management in boreal forests. However, the effects of intermediate harvest intensity (45%–80%) on growth remain unknown in black spruce (Picea mariana (Mill.) B.S.P.) stands, one of the most widely distributed boreal species with great commercial interest. In this study, we analysed the effect of three experimental shelterwood and one seed-tree treatments on tree radial growth in even-aged black spruce stands, 10 years after intervention. Our results show that radial growth response 8–10 years after cutting was 41% to 62% higher than in untreated plots, with stand structure, treatment, tree position relative to skidding trails, growth before cutting and time having significant interactions. The stand structure conditioned tree growth after cutting, being doubled in younger and denser stands. Tree spatial position had a pronounced effect on radial growth; trees at the edge of the skidding trails showed twice the increase in growth compared to interior trees. Dominant trees before cutting located close to the skidding trails manifested the highest growth response after cutting. This research suggests that the studied treatments are effective to enhance radial wood production of black spruce especially in younger stands, and that the edge effect must be considered in silvicultural management planning.

In this study, the researchers analyzed the effects of two different forest management treatments on the growth of black spruce stands located in the Côte-Nord and Saguenay regions. The analyses were performed 8 to 10 years after the treatments were performed. The treatments analyzed were progressive seed cutting and seed-tree method cutting.

Study results show that the tree growth rate was 41% to 62% higher in treated plots than in untreated ones. This increase was more pronounced in trees located close to trails used by mechanical equipment because of the increased openness of the canopy and the greater exposure to sunlight, in dominant trees, as well as in young and dense stands.

Forest managers in eastern Canada are very interested in the development of innovative methods of partial cutting, particularly in order to ensure sustainable wood production, while also supporting the key ecological characteristics of forest ecosystems. 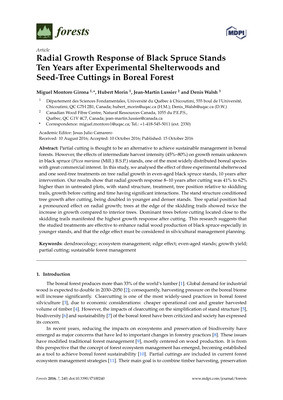