There is considerable variation in the degree of burn severity in boreal fires. One approach that has been used to capture this variation from field and remote sensing perspectives for western Canadian boreal forests is the Composite Burn Index (CBI) and differenced Normalized Burn Ratio (dNBR). Of interest was how well these methods may perform for fires in eastern Canada. This study investigated the CBI-dNBR relationship for selected fires in the eastern boreal forests of Canada, with a view towards contributing to the generalisation of a Canada-wide model. Results for the sampled region showed no difference in the CBI-dNBR relationship between black spruce- and jack pine-dominated stands, whereas this relationship was best described by a Generalised Additive Model (GAM). The dNBR-derived maps would also be useful in support of research and post-fire management in burns outside the studied territory and time frame covered by the existing burn severity mapping system already used in this region. The Saturated growth model proposed for the western boreal region also performed well for our eastern boreal region, thus further supporting the development of a national model.

This study shows that using Landsat satellite imagery coupled with the differenced normalized burn ratio index is a valid approach for quantifying and mapping previous years’ burn severity in the boreal forests of eastern Canada. More specifically, this ratio has been effective for two important fire-adapted species, i.e. black spruce and jack pine. These results are useful for research in post-fire forest ecology and for forest management. 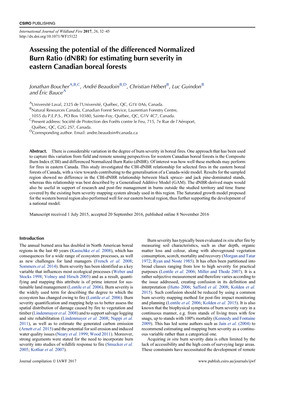