The reduction of standing trees to fine wood chips (mulch) is an increasingly common practice in reducing fuel available to wildfires near communities. This technical paper is an overview of recent advancements in the study of mulch fuels, and is designed for applied use by fire management practitioners. The essential physical characteristics of mulch are described, as is a simple model to predict the depth of the mulch layer based on the number and size of trees in an area, as well as the intensity of the mulching treatment. The moisture dynamics of the mulch layer are influenced greatly by the uppermost 2 cm, which rapidly dries from surface winds and sun exposure. The potential of mulch fuels to start a flaming surface fire is the same as other forest materials given the same moisture content, though the drying rate of wind and sun-exposed mulch fuels is consistently higher than most materials found on an unaltered forest floor. Documentation of fire spread rates and flame heights in mulch fuels are found to be limited in quantity, but preliminary data are similar to logging slash. Laboratory experiments on charcoal (black carbon) production in mulch fuels shows that charcoal production is highest when larger diameter (1–3 cm) mulch particles are retained instead of being ground into finer particles. 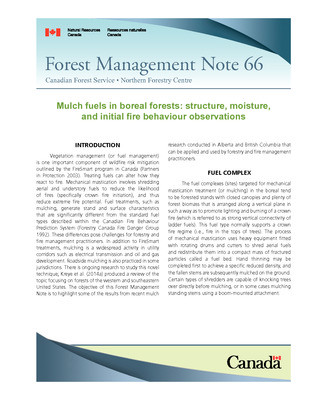