Large lakes can act as firebreaks resulting in distinct patterns in the forest mosaic. Although this is well acknowledged, much less is known about how wildfire is affected by different landscape measures of water and their interactions. Here we examine how these factors relate to historic patterns of wildfire over a 35-year period (1980–2014) for the boreal forest of Saskatchewan, Canada. This includes the amount of water in different-sized neighborhoods, the presence of islands, and the direction, distance, and shape of nearest lake of different sizes. All individual factors affected wildfire presence, with lake sizes ≥5000 ha and amount of water within a 1000-ha surrounding area the most supported spatial scales. Overall, wildfires were two-times less likely on islands, more likely further from lakes that were circular in shape, and in areas with less surrounding water. Interactive effects were common, including the effect of direction to lake as a function of distance from lakeshore and amount of surrounding water. Our results point to a strong, but complex, bottom-up control of local wildfire activity based on the configuration of natural firebreaks. In fact, fire rotation periods predicted for one area varied more than 15-fold (<47 to >700 years) depending on local patterns in lakes. Old-growth forests within this fire-prone ecosystem are therefore likely to depend on the surrounding configuration of larger lakes.

Large lakes act as natural “firebreaks,” stopping wildfires from spreading and providing refuge for plant and animal species. But little is known about how wildfire risk is affected by various aspects of lakes. Does the proportional area occupied by lakes affect risk? Does being on the east side of a lake (since wind is generally from the west) provide greater protection? Does the size or shape of the lake affect risk? Are fires less common on islands? This study answered these questions by examining maps of wildfires over 35 years (1980 to 2014) in boreal ecozones of Saskatchewan and comparing these with maps of lakes. It found that larger lakes (especially more than 5000 hectares) provided greater protection from wildfire. The areas around lakes were protected from fire, especially the lakeshore within 100 metres, but the effect can extend for up to 2 ½ kilometres from the lake. The proportional area accounted for by lakes was a strong factor. Direction to the nearest lake and irregular shape of lakes were also factors, and islands experienced half as much fire as other areas. As well, these factors can work together to affect risk, with patterns of wildfire risk around lakes being extremely variable. This is important knowledge for managing forests generally and especially for conserving old-growth forest. 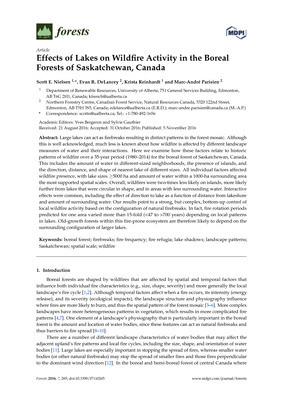