The main objective of this study was to estimate past and future dynamics of forest carbon pools in South Korea, as classified by the Intergovernmental Panel on Climate Change (IPCC) Good Practice Guidance (GPG) and to test the Carbon Budget Model of the Canadian Forest Sector 3 (CBM-CFS3). Inventory data required in CBM-CFS3 were extracted from Korea’s 3rd Forest Type Map. The site index in the inventory data was estimated through regression models developed using 5th National Forest Inventory (NFI) data with 4000 plots. Necessary yield tables to a stand age of over 100 years, stratified by species, were prepared through the estimation of volume per ha with tree species, site index and stand age. We considered thinning and cutting regulations for sustainable forest management announced by the Korean Forest Service and that the forest area was constant over from 1992 to 2092. We estimated the carbon stocks and their changes of aboveground (AGB) and belowground (BGB) biomass, litter (L), dead wood (DW), and soil organic matter (SOM). Validation was conducted based on the 5th NFI and statistical data. Our results showed that the carbon content of the total forest area increased from 509.7 Tg C to 1007.3 Tg C at a rate of 11.8 Tg C yr-1 during 1992-2034. Results also showed that AGB, BGB, DW, L and SOM changed from 54.6, 30.2, 15.9, 43.6, and 373.9 Tg C in 1992 to 455.6, 100.77, 32.89, 65.46, and 369.2 Tg C in 2034, respectively. However, the amount of forest carbon was projected to decrease due to large increases in harvest rates as most of the forest reaches the legislated cutting age during 2035-2045. Our simulation estimated that by 2045 AGB, BGB, and SOM decreased to 347.8, 78.2, and 368.9 Tg C, respectively, while DW and L increased to 46.8 and 89.1 Tg C, respectively. The carbon content of the total forested area starts to stabilize after 2045 as the annual stand growth gradually decreases. Finally in 2092, the carbon content of AGB, BGB, DW, L, and SOM was estimated as 422.3, 93.9, 31.2, 63.0, and 365.1 Tg C, respectively. Through harvesting, over the 100 year period more than 200 Tg C were transferred from South Korea’s forests to meet demands for timber, fiber and energy. Good agreement between model results, NFI data and independent studies, demonstrates the applicability of CBM-CFS3 for estimating past and future forest carbon budgets in South Korean forests and for exploring forest management activity impacts in managed forests.

This publication is the result of collaboration between the CFS and Korea University. The study demonstrates the application of Canada’s Carbon Budget Model (CBM-CFS3) to Koreas forests for the period 1992 to 2092. Korea’s national forest inventory data for 750 mapsheets representing all of Korea were imported and forest carbon dynamics were analysed. Results show the large increase in available timber in the coming decades as large tracts of forests that were planted in the 1970 reach harvestable age. Through harvesting, over the 100 year period over 200 Tg C were transferred from South Korea’s forests to meet demands for timber, fiber and energy. The potential contribution of this wood to help meet Korea’s climate change mitigation objectives is the subject of ongoing collaboration. 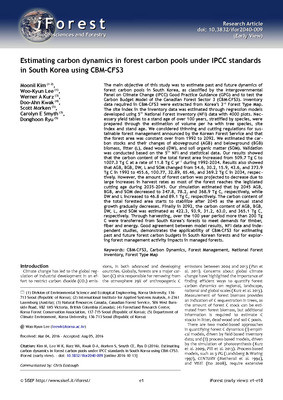