Aim Wildfire activity is projected to increase under global warming in many parts of the world. Knowledge of the role of these disturbances in shaping the composition of boreal forests is needed to better anticipate their future impacts. Here, we investigate the incidence of wildfire activity (burned biomass, frequency and size) on multi-millennia vegetation trajectories in two coniferous boreal forest regions that display different types of vegetation composition and relief. We hypothesize that this difference in vegetation results from dissimilar wildfire activity during the Holocene.

Main conclusions In the coniferous boreal forests of eastern North America, fire size was relatively more important in determining the long-term vegetation trajectories in comparison with fire frequency. Changes in the rate of occurrence of large-fire episodes will have significant impacts on vegetation dynamics over the next decades under continuing warming.

This article shows that the composition of eastern North American boreal forests is predominantly determined by the size of wildfires rather than their frequency. The researchers studied boreal forest evolution and forest fires from as far back as the Holocene period (last 10,000 years). They observed that the interactions that took place in the past between fire and vegetation have influenced the current structure of eastern North American boreal forests. This research shows that long-term variations in fire dynamics can explain most aspects of vegetation development in these forests. The adaptation of tree species to fire may also have played an important role in forest composition. 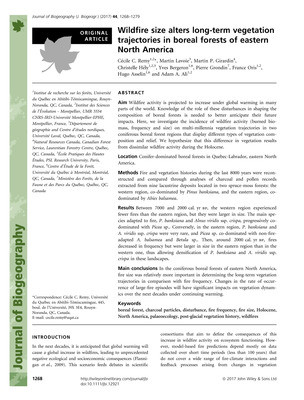