Retention of living trees in harvested stands is widely promoted as a way to conserve forest biodiversity; however, the quantity, quality and distribution of retention required to best meet biodiversity conservation goals are uncertain. We compared saproxylic beetle assemblages in dead white spruce among two sizes of retention patches (0.20 ha and 0.46 ha) surrounded by three different levels of dispersed retention (2% = clearcut, 20%, and 50%) in 10 ha cut-blocks included in the EMEND (Ecosystem Management Emulating Natural Disturbance) experiment in northwestern Alberta, Canada. Significant blow-down in forest patches of these sizes appeared to reduce their conservation capacity for saproxylic beetle assemblages 10–11 years post-harvest. However, higher amounts of dispersed retention in the matrix surrounding patches increased their capacity to maintain saproxylic beetle assemblages in comparison to clearcuts. Predatory species were most sensitive to harvesting intensity in the surrounding matrix. Our data suggest that ecosystem-based management that leaves combinations of aggregated and dispersed retention has much potential for conservation of saproxylic beetles.

A recent approach to forestry, called “retention forestry,” involves leaving behind single trees (“dispersed retention”) and patches of forest (“aggregated retention”) after harvesting in a way that emulates natural processes such as wildfire. Retaining trees in harvested areas provides “conservation lifeboats” where native plants and animals can survive and emerge to repopulate the forest when it grows back. But it is not clear whether the best way to maintain the ecosystem is dispersed or aggregated retention, or some of both. The authors wondered whether leaving more dispersed trees in addition to forest patches would increase conservation of species – in this case, beetles. They looked at three forest stands dominated by white spruce that had been harvested in 1998-99 (10 to 11 years before the study) at the Ecosystem Management Emulating Natural Disturbance research site in northwestern Alberta. The study collected beetles at these sites and found better conservation of beetle species in harvested stands where there were both patches of forest and 20% or 50% dispersed retention as well. When the forest around the patches had been clearcut, conservation was not as strong. This study also noted that trees left standing after harvest were subject to “blowdown” due to wind because they were more exposed. 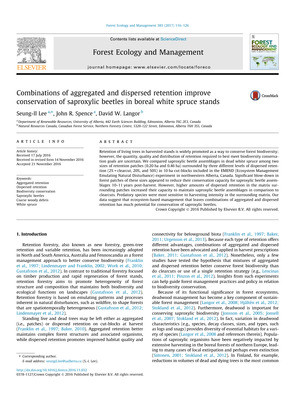