Aims and Methods: We measured changes in mass and in carbon (C), nitrogen (N) and phosphorus (P) concentrations and content of surface-placed and buried wood blocks decomposing over 12 years at 21 sites across Canada to evaluate the influence of the environment on C, N, and P dynamics.

Results and Conclusions: Carbon decomposition over time was best described using a sigmoidal fit, which was slightly better than a negative exponential function. Decomposition was slow at cold and wetland sites, with less than 15 % of the original C content lost after 12 years for 4 upland and 3 wetland sites. Decomposition rates were faster for buried than for surface blocks, except in wetlands and in a few upland sites that had high annual precipitation. Nitrogen was gained during the early stages of decomposition, followed by a net N loss once an average C:N mass ratio of 165 was reached for all upland surface-placed blocks, and 200 for upland buried blocks. Critical C:N values were weakly correlated with C:N ratios in the surface organic horizon, suggesting an influence of forest floor properties on decomposition dynamics with N release occurring sooner on more fertile sites. Critical values for N and P mineralization were greater than those reported for foliar litters.

The Canadian Intersite Decomposition ExperimenT (CIDET) was a litterbag experiment established in 1992 to examine leaf and wood decay over 12 years in various climates across Canada. We examined the data in a series of hypothesis tests to determine the influence of temperature and moisture on wood decay. We also examined how nutrients are released during decomposition. Key findings are: 1) Wood block decay is slow for the first few years, but then has a rapid phase of decay. 2) Decay is slower when there is too much moisture (wetlands or regions with high precipitation), but generally buried wood decays faster than surface-placed wood. 3) Nutrients Nitrogen and Phosphorus were initially taken into the wood block from the surroundings, but then are released as decay progresses. Long-term experiments for wood decay are very rare, and these observations will be of interest to those measuring or modeling wood decay. 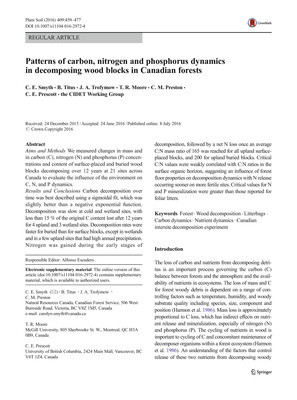