Spatially explicit individual-based models (SE-IBMs)can simulate species’ movement behaviors. Although such models allow many applications to ecology and conservation biology and are useful for management purposes, they are difficult to parameterize directly from the kinds of observational data that are generally available. Coupled with pattern-oriented modeling strategy, SE-IBMs can be parameterized and assess alternate hypotheses on movement behaviors by comparing simulated to observed patterns of movement. We illustrated this with the endangered Atlantic-Gaspésie caribou population while using sparse Very High Frequency (VHF) telemetry data. We formulated alternative movement hypotheses built around proximate movement mechanisms and coded them into an SE-IBM to explain and predict caribou movement. These mechanisms were: a random walk, a biased correlated random walk, a foray loop to reproduce caribou extra-range movement patterns, and caribou fidelity during mating season. We combined these to test single and two-behavior movement models regarding landscape quality. The best fitted model successfully reproduced most of the movement patterns derived from the VHF locations. We found that caribou movement in low quality habitat was better reproduced by a foray loop behavior than by a biased correlated random walk or a random walk. Adding an attraction to the individuals’ mating area during the mating season also improved the model. We used the selected model to estimate and map potential landscape use by the Atlantic-Gaspésie caribou. We confirmed areas of high use seen in the VHF data and identified some potential areas where no caribou locations were recorded. We also found that large areas of moderate to high quality habitat were unused because they could not be reached by caribou. We conclude that sparse datasets, such as VHF collar locations, can be used to fit movement models whose parameters could not be estimated directly from the data. SE-IBMs coupled with pattern-oriented modeling can reveal new insights about landscape use beyond what can be defined with habitat selection models, and can identify habitat locations where management actions could be taken to facilitate species persistence or recovery of endangered populations.

To help endangered species, scientists try to describe where they are and what types of habitat they need. With this knowledge, we can make decisions about management of the forests that support these endangered species. For many species, however, we don’t have enough data to do this. This paper uses an approach that allows us to give a good estimate of what woodland caribou in eastern Quebec require, in spite of having weak data. We found that there are potentially good quality places where caribou are not currently moving to, but that are within reach, if some slight management modifications were made. This paper will help the forest and park managers where these caribou currently exist to make forest management decisions that will be beneficial for the longer term persistence of the caribou in the area. 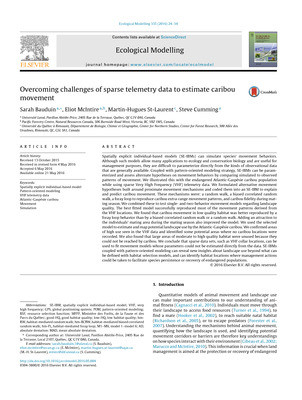