Western spruce budworm is a defoliator of coniferous forests of North America. Past research has shown that climate is a principal driver of budworm outbreaks, though the underlying relationships are not well understood. We utilized Landsat time series to investigate the relationships between spatiotemporal patterns of budworm outbreaks and weather variability. Landsat-based maps of budworm infestations from (1995–2013) were produced and used to describe patterns of the most recent budworm outbreak in British Columbia. Superposed epoch and regression analysis were used to explore relationships between outbreak patterns and annual temperature and precipitation anomalies. We found that western spruce budworm outbreaks were preceded by autumn precipitation deficits that were 12% lower than the long-term average, and co-occurred with summer precipitation up to 20% below the long-term average. Spring temperatures shortly before outbreaks were 0.7°C lower than normal, whereas winter temperatures during outbreaks were above average by 0.5°C. We concluded that the most recent outbreak of western spruce budworm in British Columbia co-occurred with distinct weather patterns that probably facilitated budworm population development and synchronized host-herbivore phenology. Although Landsat has been used to map insect disturbances, our study demonstrated its usefulness for understanding landscape- to regional-scale drivers of budworm outbreaks.

We investigated relationships between the temporal patterns of a western spruce budworm outbreak and weather anomalies in southern British Columbia, Canada, and used this information to evaluate changes in outbreak dynamics under climate change. Landsat maps of spruce budworm defoliation from 1995 to 2013 were used to describe temporal patterns of the most recent budworm outbreak. We found that initiation of the outbreak was preceded by five successive years of autumn precipitation that were 13% lower than the long-term average; and co-occurred with about eight years of significantly lower than average summer precipitation with precipitation being up to 16% below the long-term average. Using autumn precipitation, we could explain the annual probability of defoliation by nearly 40% (pseudo R2 = 0.38). Variables with a significant effect in the analysis were projected into the future. Wetter autumn conditions and drier summer conditions suggest future outbreaks might be hampered despite the potential expansion of its host. 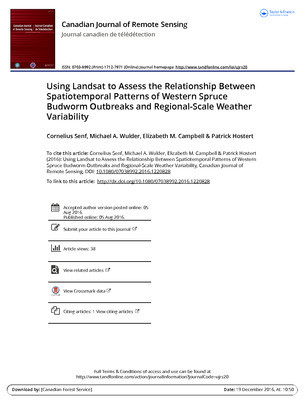