From the early descriptive work, focussed on documenting the forest insect fauna and the impacts of destructive species, Canadian forest entomology has passed through several distinct phases, each triggered by new societal demands of forests and of forest entomologists. We review the various stages that Canadian forest entomology gone through in the last 100 years. Following the initial descriptive and cataloguing phase, forest entomology entered a pest control or forest protection phase, which eventually evolved into the integrated pest management (IPM) era. Although IPM dominated the forest entomology discourse for at least two decades, this approach is now considered to be narrow and pest-centric and is being superseded by a more holistic approach where the emphasis is on ensuring the health and sustainability of forests at landscape levels. The new trends point away from the “command and control” approach of attempting to eradicate pests or reducing pest damage, and towards working with natural processes in the context of ecosystem management. We indicate several areas where 21st century forest entomology could make a contribution towards the sustainable management of Canadian forests.

Generations of Canadians have studied insects in forests. We briefly review how the science of forest entomology in Canada has changed over the last 100 years and provide some insights into what the future might hold. Before the 1930s, work focused on describing and cataloguing the insects that live in forests. As the forest industry grew in importance during the 1930s, research in forest entomology evolved to provide the biological and technical knowledge required to protect Canadian forests from pests. In the 1970s, societal pressure grew for scientists to find new ways to control pests after the release of influential publications like Silent Spring, which warned of the threats posed by the indiscriminate use of pesticides. In response, forest entomologists adopted a new approach, called integrated pest management, which used various methods to minimize risk to human health and the environment. This approach is now being replaced by a more holistic paradigm, called sustainable forest management, that views native insects not as “pests” but as integral parts of well-functioning ecosystems that need to be managed and conserved. 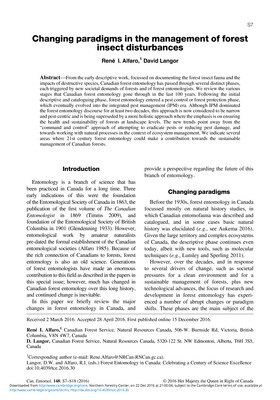