Old-growth forests play a decisive role in preserving biodiversity and ecological functions. In an environment frequently disturbed by fire, the importance of old-growth forests as both a carbon stock as well as a source of emissions when burnt is not fully understood. Here, we report on carbon accumulation with time since the last fire (TSF) in the dominant forest types of the Clay Belt region in eastern North America. To do so, we performed a fuel inventory (tree biomass, herbs and shrubs, dead woody debris, and duff loads) along four chronosequences. Carbon emissions by fire through successional stages were simulated using the Canadian Fire Effects Model. Our results show that fuel accumulates with TSF, especially in coniferous forests. Potential carbon emissions were on average 11.9 t·ha-1 and 29.5 t·ha-1 for old-growth and young forests, respectively. In conclusion, maintaining old-growth forests in the Clay Belt landscape not only ensures a sustainable management of the boreal forest, but it also optimizes the carbon storage.

In this study, the researchers showed that fuel accumulates after a fire in coniferous forests. They also used simulations to demonstrate that, on average, old-growth forests generate less carbon during a fire than younger forests, and that fuel structure had an impact on the amount of carbon emitted.

Therefore, maintaining old-growth forests in the Clay Belt area of Northern Ontario and Abitibi-Témiscamingue would ensure the sustainability of boreal forests and optimize carbon stocks.

The purpose of this study was to analyze fuel dynamics over time elapsed since the last fire and the influence of fuel amount variations on carbon emissions due to forest fires throughout succession stages. Natural Resources Canada’s Canadian Fire Effects Model was used to simulate carbon emissions caused by forest fires. 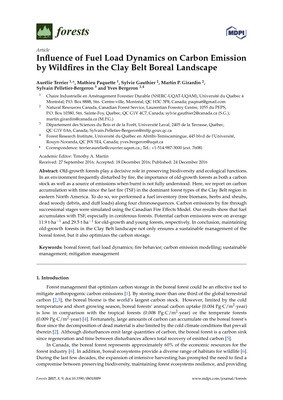