The likely spread of the current spruce budworm (SBW; Choristoneura fumiferana [Clem.]) outbreak from high to low density areas brings to the forefront a pressing need to understand its dispersal dynamics and to document mass exodus flights in relation to weather patterns. In this study, we used the weather surveillance radar of Val d’Irène in eastern Canada in combination with weather information from the Rapid Update Cycle (RUC) model output to track and document a SBW mass exodus flight that occurred on July 15–16th 2013. Analyses confirmed the potential of using weather radar and RUC data to help assess SBW mass exodus dynamics. Weather surveillance radar data suggested that the mass exodus flight originated from both the northern and southern sides of the St- Lawrence River estuary with most individuals originating from severely defoliated areas on the north shore. During the exodus flight, SBW moths may have covered a distance of over 200 km. Detailed large-scale assessment of this mass exodus flight using radar data allowed for the identification of convergence zones and a liftoff from a lightly defoliated area which has never been documented before. Based on radar and lower tropospheric weather data, SBW dispersed downwind in a rather shallow layer, probably between 400 and 800 m. These results imply that moths were generally dispersing in the vicinity of the top of the temperature inversion zone where both temperature and wind were highest throughout the exodus flight period. We advocate that the use of weather radar technology coupled with data on lower tropospheric weather conditions might benefit other monitoring tools already being used and may also help calibrate SBW atmospheric transport models.

To monitor the spruce budworm (SBW), the researchers recommend combining weather radar technology with data on lower troposphere meteorological conditions. This combination could help calibrate SBW atmospheric transport models, and could also complement other monitoring tools that are already in use.

In this study, the researchers used the weather radar located in Val d’Irène, in eastern Canada, combined with modelled weather data to monitor and document SBW flight patterns during the massive out-migration that occurred on July 15 and 16, 2013, in the Lower St. Lawrence region.

The spread rate of the current SBW outbreak and its economic impact illustrate how urgently we need to better understand the dispersal dynamics of this insect and to document massive out-migration flight patterns in relation to meteorological models. 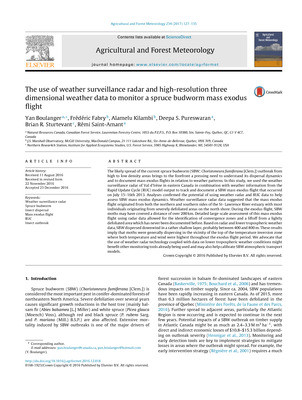