The objective and key findings are to describe two species representing two genera new to Africa and one remarkable species in the worldwide genus Anaphes (also from Africa), and to place in synonymy a previously described African genus. An illustrated generic key and catalogue to all African genera of Mymaridae (fairyflies) is being prepared as part of an eventual multi-authored book that keys the genera all African chalcid wasps but that book will not include descriptions of new genera and species, hence the need to publish them first.
The junior author discovered the unidentified material and sent it to the senior author who wrote the entire text. The impact is to ensure that the genera and species of Mymaridae egg parasitoids are properly described, named and classified and to avoid redescribing the same genus or species more than once under different names. At the genus level, a world view is needed to ensure that new names for genera (or species) are not proposed, based on specimens occurring in various parts of the world when, in fact, those genera (or even species) are widespread (sometimes even worldwide) and may have already been described from elsewhere. 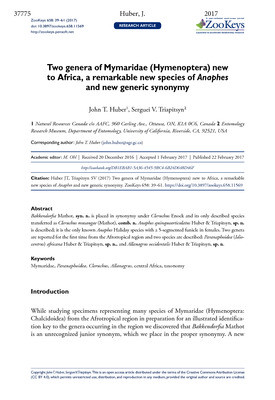