The objective is to review the current knowledge of a family of egg parasitic wasps (Mymaridae or fairyflies) in New Guinea, based on a collection of about 150 specimens from a collecting transect from sea level to 3700m near the summit of Mt. Wilhelm. Specimens and information from other sources was also included. The project was organized by staff at the National Museum of Natural History, Paris, and I was an invited contributor for one chapter. Specimens were sent to me for study in Ottawa. Two species of Nepolynema (Mymaridae or fairyflies), a small genus Mymaridae from higher elevations in mountains of southeast Asia, New Guinea, and Central America were described as new. A unique secretory gland of yet unknown function was discovered on the thorax of both species. The presence of this gland allowed me to classify the genus properly in my ongoing work on taxonomy of Mymaridae. The mymarid fauna was analysed and a list of 28 genera from New Guinea is given, the first time such a list has been compiled for this Island. At this point there is no interest for the public at large or the media 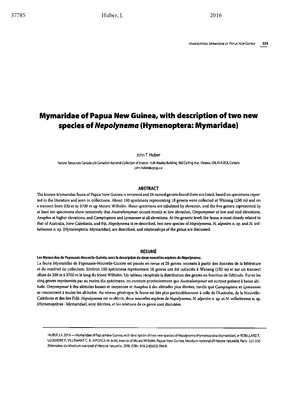