Our objective was to model the average wood density in black spruce trees in representative stands across a boreal forest landscape based on relationships with predictor variables extracted from airborne light detection and ranging (LiDAR) point cloud data. Increment core samples were collected from dominant or co-dominant black spruce trees in a network of 400 m2 plots distributed among forest stands representing the full range of species composition and stand development across a 1,231,707 ha forest management unit in northeastern Ontario, Canada. Wood quality data were generated from optical microscopy, image analysis, X-ray densitometry and diffractometry as employed in SilviScan™. Each increment core was associated with a set of field measurements at the plot level as well as a suite of LiDAR-derived variables calculated on a 20 × 20 m raster from a wall-to-wall coverage at a resolution of ~1 point m-2. We used a multiple linear regression approach to identify important predictor variables and describe relationships between stand structure and wood density for average black spruce trees in the stands we observed. A hierarchical classification model was then fitted using random forests to make spatial predictions of mean wood density for average trees in black spruce stands. The model explained 39 percent of the variance in the response variable, with an estimated root mean square error of 38.8 (kg·m-3). Among the predictor variables, P20 (second decile LiDAR height in m) and quadratic mean diameter were most important. Other predictors describing canopy depth and cover were of secondary importance and differed according to the modeling approach. LiDAR-derived variables appear to capture differences in stand structure that reflect different constraints on growth rates, determining the proportion of thin-walled earlywood cells in black spruce stems, and ultimately influencing the pattern of variation in important wood quality attributes such as wood density. A spatial characterization of variation in a desirable wood quality attribute, such as density, enhances the possibility for value chain optimization, which could allow the forest industry to be more competitive through efficient planning for black spruce management by including an indication of suitability for specific products as a modeled variable derived from standard inventory data.

The objective of this work was to look at how forest stand structure influences wood density, which is a wood property that affects the quality of lumber and paper products. The researchers measured the density of wood samples taken from black spruce trees in the region around Hearst, Ontario. They measured forest stand structure using a laser scanner on an airplane. The scanner sends out laser pulses that are reflected from tree crowns, and these reflected pulses are recorded by a detector on the aircraft. This method makes it possible to obtain three-dimensional information about the forest canopy. The main stand structure factors that affected wood density were the canopy height of the lower laser pulse reflections and tree diameter. Wood density decreased with increasing values of both of these factors. Stand structure factors explained some, but not all, of the variation in wood density. These results increase our understanding of how stand structure affects wood density in black spruce, and will make it possible to better manage forests for products with particular wood density requirements. 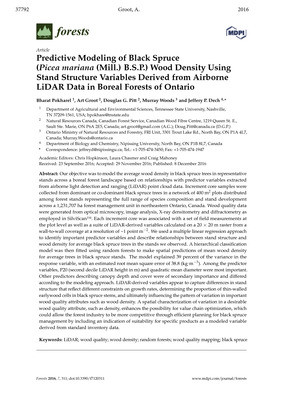