A soil food web (FW) based approach to modelling the contribution of soil micro- and mesofauna to theformation of soil organic matter (SOM) was developed as an improvement to the soil organic matter model ROMUL, which is the predecessor of Romul_Hum. The main improvement is that the by-products (excrement and necromass) of soil micro- and mesofauna, and their important role as precursors to formation of stable SOM, that are not represented in any soil organic matter model, are now included in the Romul Hum. First, parameters were compiled to explicitly and mechanistically model the foundational role of microbial communities in the soil FW by using a substrate C:N ratio based function that allows (a) the fungal to bacterial biomass ratio to vary from 3 to 15, (b) fungal C:N to vary from 8 to 30, and (c) bacterial C:N to vary from 5 to 8. These equations were used in model algorithms instead of fixed values that are used in the SOM models. Second, ordination was used on 15 published FWs biomass C datasets to define six FW patterns as combinations of two energy channels (fungal and bacterial) and three types of soil horizons (L, F + H, Ah or Ahe) in temperate and boreal forests. Third, FW analysis methods were used to quantify excrement and necromass C produced by soil micro- and mesofauna at different trophic levels.Soil heterotrophic respiration (expressed as the rate of SOM mineralisation), a core rate variable in all SOM models, was associated with the formation of the faunal by-products (excrement and necromass) using stoichiometric relationships between the production of faunal excrement, necromass and total FW biotic respiration. The ratios of “excrement mass/necromass C to soil heterotrophic respiration C” were key parameters incorporated into the Romul Hum. The values of these ratios vary from 0.03 to 0.41 for the bacterial energy channels (with maximum in the F + H soil horizon) and from 0.02 to 0.17 in fungal energy channels (with maximum in the Ah/Ahe soil horizon). The well established mechanistic algorithm for available nitrogen (N) of the FW methodology was used to develop functions for the “ratio of available N to heterotrophic respiration C” depending on substrate C:N ranging from 5 to 120. The resulting algorithms, functions and new parameters for excrement and necromass production, as well as parameterisation of available N production, are described for all six FW patterns.The newly developed FW module was incorporated in the simulation model of SOM formation, Romul Hum, allowing for the calculation of faunal organic matter contributions to SOM formation. This novel approach to including soil faunal activity in modelling of soil C dynamics takes advantage of the high degree of organisation within soil biotic communities in FWs and integrates the effects of microorganisms and soil fauna that govern the processes of organic residues transformation and mineralisation in the soil system.

Soil organic matter (SOM) computer models are used, alone or with ecosystem computer models, to calculate the amount of carbon (C) in soil and the amount of C released from soil to the atmosphere as the greenhouse gas carbon dioxide. It is important to develop new SOM models for forests because we know less about C storage and changes in soil than we do about these processes in trees. Most SOM models use only the activity of bacteria to model loss of C from the soil to the atmosphere as carbon dioxide, and they do not model processes of SOM formation. However, fungi and soil fauna are also important to these processes, especially in forest ecosystems. We combined decades of scientific data on soil food webs (predator–prey relations), development of soil organic horizons, and SOM formation to create a model of the effects of bacteria, fungi, and certain soil fauna on SOM formation. This model does a better job than other models of representing SOM processes that are particularly important to forest ecosystems. It can be used to examine the role of soil fauna in storing C in various ecosystems and to describe the relations between the diversity of living things in soil and ecosystem C storage. 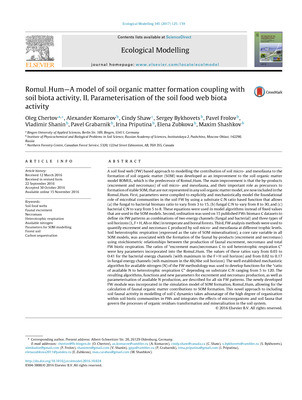