Endoparasitoids face the challenge of overcoming the immune reaction of their hosts, which typically consists of encapsulation and melanisation of parasitoid eggs or larvae. Some endoparasitic wasps such as the solitary Tranosema rostrale (Hymenoptera: Ichneumonidae) that lay their eggs in larvae of the spruce budworm, Choristoneura fumiferana (Lepidoptera: Tortricidae), have evolved a symbiotic relationship with a polydnavirus (PDV), which in turn helps them suppress the host’s immune response. We observed an increase in mortality of immature T. rostrale with increasing temperature, and we tested two hypotheses about the mechanisms involved: high temperatures (1) hamper the expression of T. rostrale PDV genes and (2) enhance the expression of spruce budworm immunity-related genes. Dissections of parasitized spruce budworm larvae reared at 30 C revealed that most parasitoid eggs or larvae had died as a result of encapsulation and melanisation by the host. A qPCR analysis of T. rostrale PDV (TrIV) gene expression showed that the transcription of several TrIV genes in host larvae was downregulated at high temperature. On the other hand, encapsulation, but not melanisation, of foreign bodies in spruce budworm larvae was enhanced at high temperatures, as shown by the injection of SephadexTM beads into larvae. However, at the molecular level, the transcription of genes related to spruce budworm’s melanisation process (prophenoloxidase 1 and 2) was upregulated. Our results support the hypothesis that a temperature-dependent increase of encapsulation response is due to the combined effects of reduced expression of TrIV genes and enhanced expression of host immune genes.

In this study, the researchers examined the molecular factors responsible for the immune response of the spruce budworm (SBW) to the Tranosema rostrale parasite in relation to temperature. The T. rostrale parasitoid wasp uses its stinger to lay its eggs beneath the skin of SBW larvae.

The SBW is a native pest. Its outbreaks are the most significant natural disturbance affecting Canadian fir forests. SBW parasitoids play a vital role in maintaining populations at an endemic level between outbreaks. 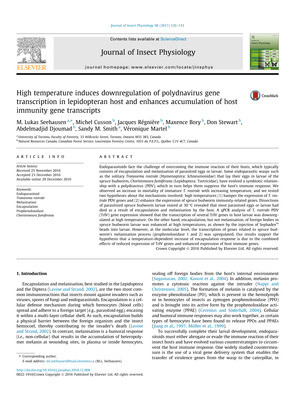