Early successional competition among boreal forest tree and shrub species and its effects on growth of commercial tree species have been a major source of uncertainty in establishing efficient precommercial thinning and brushing prescriptions. We examined the effect of prethinning competitor density, postthinning competitor regrowth density, prethinning stem diameter, and the timing of thinning operations on the growth response of black spruce (Picea mariana [Mill.] BSP) and jack pine (Pinus banksiana Lamb.). In addition, we examined the mortality rate of hardwoods after thinning and the number of new shoots produced per surviving thinned stem. For jack pine, growth response was greatest when thinning occurred between 4 and 9 years after establishment, whereas for black spruce we observed no significant relationship between growth response and the timing of treatment. For jack pine, growth response was significantly affected by pretreatment competitor density, posttreatment competitor regrowth density, and pretreatment stem diameter. For black spruce, no significant relationship was observed between growth response and any variables. Mortality rates and production of new shoots in hardwoods varied significantly between species. Considering the high regrowth potential of willow (Salix spp.) and alder (Alnus spp.), we recommend that stands exhibiting low densities of these species should be left unthinned. Our results help foresters identify stands that require precommercial thinning and call for modification of currently used thinning strategies.

The researchers further noted that with jack pine the response to this treatment is affected in particular by the diameter of the stems removed and by the density of the competition prior to the treatment. In black spruce, the researchers found that these variables had no significant impact on growth.

These results will help forest managers identify which stands need precommercial thinning and will make it possible to adapt to current thinning strategies. 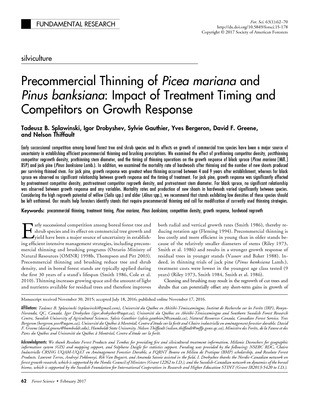