For many decades in the late 20th century, the processes involved in the formation of soil organic matter (SOM) (also known as humification) constituted one of the most important areas of scientific inquiry in soil science. However, these processes have not been included in modern models of SOM dynamics, despite their relevance to quantifying carbon stabilisation (i.e., sequestration) in soil. Furthermore, modern models have focussed on mineralisation processes (e.g., mainly microbial heterotrophic respiration) and have not included the important effects of soil fauna that are known as key agents of SOM formation. To address these issues, we developed a modelling approach predicated on the existence of definable stoichiometric relations among the processes leading to SOM formation that are mediated by soil biota (e.g., correlations among biotic respiration, production of faunal excrement, and necromass as sources of SOM formation). Soil respiration, a core rate variable in all SOM models, was associated with the production of faunal by-products in soil food webs as precursors of stable SOM, specifically micro-and meso-faunal excrement, necromass, and earthworm casts. We developed a food-web based module,using a synthesis of decades of published data, to describe micro- and meso-faunal excrement and necro-mass production. We developed a separate module for anecic earthworms, with explicit representation of processes related to fresh casts. The contributions of these two modules were compiled and integrated with the ROMUL model of SOM dynamics, without changing the structure of the original model. These modules enabled calculation of the proportional contribution of faunal by-products to humification (i.e., recalcitrant SOM formation) and carbon sequestration. Testing of the new version of the model, known as Romul_Hum, showed consistent accumulation of faunal by-products in the “final” SOM fractions: the well-decomposed SOM of the organic soil horizons and the stable SOM of the mineral soil.

Soil organic matter (SOM) computer models are used, alone or with ecosystem computer models, to calculate the amount of carbon (C) in soil and the amount of C released from soil to the atmosphere mainly as carbon dioxide, a greenhouse gas. These models may not be very good at calculating how much C is stored in soil, as they focus on loss, not retention, of soil C. It is important to develop new SOM models for forests because we know less about C storage and changes in soils than in trees. Romul_Hum is a new SOM model incorporating processes that represent long-term storage of C in soil, including effects of fungi and soil fauna, such as earthworms and mites, which are important in forests but are not included in other SOM models. Testing of the model showed trends for soil C accumulation similar to those described for development of organic soil horizons in forests. The Romul Hum model will help in calculating the rate of C storage in soil and determining the importance of soil organisms to changes in soil C. This information will allow us to do a better job of calculating the amounts of C in forest ecosystems and their contribution to greenhouse gases. 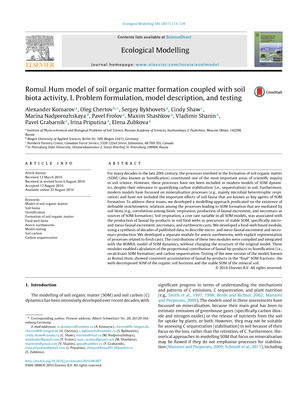