Quantitative description of the role of soil fauna in soil organic matter (SOM) formation and dynamics is necessary for further development of SOM modelling. This is especially true for the role of anecic earthworms in SOM formation, which was first observed in the classical investigations of Charles Darwin in 1881. Despite the large number of earthworm studies available in the literature, more attention has been paid to the role of these organisms in loss of carbon through decomposition and nutrient release than to their role in SOM formation. A set of anecic earthworm parameters were compiled or developed for ease of incorporation as a module into the SOM dynamics model Romul_Hum, which also represents the SOM forming activities of soil micro- and meso-biota. An approach was developed for initialization of earthworm biomass in the absence of measured biomass, and parameters were developed for food palatability, ingestion and egestion. The eco-physiological parameters of food consumption, excretion efficiency, assimilation efficiency, lifespan, and mortality for anecic earthworms were developed using an approach similar to that for food web mesofauna in the Romul Hum. Parameters for processes unique to freshly excreted casts were developed to include rapid mineralization of SOM and nitrogen, SOM formation, and high nitrogen fixation rates. The addition of the earthworm module to the Romul Hum model allows assessment of the combined effects of earthworms cast production, and micro- and meso-faunal food web activity within the casts, on the formation of stable SOM.

Soil organic matter (SOM) computer models are used, alone or with ecosystem computer models, to calculate the amount of carbon (C) in soil and the amount of C released from soil to the atmosphere as the greenhouse gas carbon dioxide. It is important to develop new SOM models for forests because we know less about C storage and changes in soil than we do about these processes in trees. Most SOM models do not account for the effects of earthworms, especially their production of long-lived soil C and their interactions with smaller soil fauna. An earthworm computer module was developed for an SOM model called Romul_Hum, which already has a module for smaller soil fauna. The earthworm module allows calculation of earthworm biomass from information about food quality. It also models processes for life span, death, and the amounts of food used for new earthworm biomass and returned to the soil as faeces. Organic C and nitrogen are rapidly decomposed in fresh faeces, and then slowly decomposed as the faeces age, eventually contributing to long-lived SOM. Having an SOM model that incorporates earthworms and their interactions with other living things fills a gap in modelling the balance in C among soil, plants, and the atmosphere. This balance is particularly important for temperate forests, where soil fauna activity contributes strongly to productivity, and in Canadian boreal forests, where earthworms have been introduced only recently by human activities but are causing changes to the soil and the overall ecosystem. 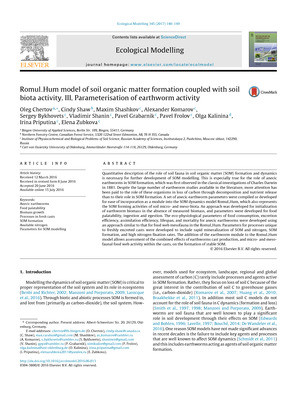