Chemical insecticides have been an important tool in the management of forest insect pests in Canadian forests. Aerial application of insecticides began in the 1920s and expanded greatly after World War II with the widespread adoption of DDT primarily for the suppression of spruce budworm, Choristoneura fumiferana Clemens (Lepidoptera: Tortricidae), and other defoliating insects. Significant progress was made in the development of new chemical insecticides and formulations including fenitrothion and tebufenozide, as well as technology for the application of insecticides against various insect pests. However, widespread opposition to the use of chemical insecticides in forest management has led to significant reductions in the number of insecticides registered for use in Canadian forests. Developments in the past 20 years have focused on new insecticides, formulations, and technologies that seek to limit the impacts on non-target organisms and subsequent ecosystem effects. These developments have resulted in significant improvements in the management of traditional management targets, such as the spruce budworm (Choristoneura fumiferana (Clemens); Lepidoptera: Tortricidae) but also the management of invasive species, especially wood-boring beetles (Coleoptera: Buprestidae, Cerambycidae).

This paper reviews the history of insecticide use in pest management in Canadian forests. This paper is one of a series of reviews of forest entomology in Canada published in The Canadian Entomologist. A large part of the paper focuses on the chemical control programs against the spruce budworm including the development and use of different insecticides, spray technology, and aerial navigation. Shorter reviews of important projects against other pests (e.g., bark beetles) are also included. We discuss modern chemical control in pest management, including the development of Neem-based insecticides, and the potential of new technologies, and how they might integrate into integrated pest management systems for forest insects. 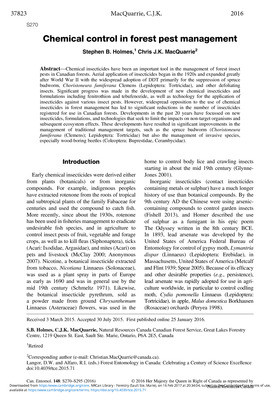