Whole genome duplication (WGD) can provide material for evolutionary innovation. Family Salmonidae is ideal for studying the effects of WGD as the ancestral salmonid underwent WGD relatively recently, ~65Ma, then rediploidized and diversified. Extensive synteny between homologous chromosome arms occurs in extant salmonids, but each species has both conserved and unique chromosome arm fusions and fissions. Assembly of large, outbred eukaryotic genomes can be difficult, but structural rearrangements within such taxa can be investigated using linkage maps. RAD sequencing provides unprecedented ability to generate high-density linkage maps for nonmodel species, but can result in low numbers of homologous markers between species due to phylogenetic distance or differences in library preparation. Here, we generate a high-density linkage map (3,826 markers) for the Salvelinus genera (Brook Charr S. fontinalis), and then identify corresponding chromosome arms among the other available salmonid high-density linkage maps, including six species of Oncorhynchus, and one species for each of Salmo, Coregonus, and the nonduplicated sister group for the salmonids, Northern Pike Esox Lucius for identifying post-duplicated homeologs. To facilitate this process, we developed MAPCOMP to identify identical and proximate (i.e. nearby) markers between linkage maps using a reference genome of a related species as an intermediate, increasing the number of comparable markers between linkage maps by 5-fold. This enabled a characterization of the most likely history of retained chromosomal rearrangements post-WGD, and several conserved chromosomal inversions. Analyses of RADseq-based linkage maps from other taxa will also benefit from MAPCOMP, available at: https://github.com/enormandeau/mapcomp/ 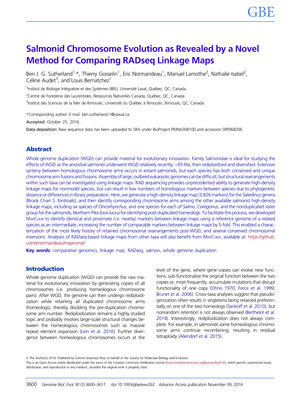