Over the last decade, extensive genetic and genomic resources have been developed for the conifer white spruce (Picea glauca, Pinaceae), which has one of the largest plant genomes (20 Gbp). Draft genome sequences of white spruce and other conifers have recently been produced, but dense genetic maps are needed to comprehend genome macrostructure, delineate regions involved in quantitative traits, complement functional genomic investigations, and assist the assembly of fragmented genomic sequences. A greatly expanded P. glauca composite linkage map was generated from a set of 1976 full-sib progeny, with the positioning of 8793 expressed genes. Regions with significant low or high gene density were identified. Gene family members tended to be mapped on the same chromosome, with tandemly arrayed genes significantly biased towards specific functional classes. The map was integrated with transcriptome data surveyed across eight tissues. In total, 69 clusters of co-expressed and co-localising genes were identified. A high level of synteny was found with pine genetic maps, which should facilitate the transfer of structural information in the Pinaceae. Although the current white spruce genome sequence remains highly fragmented, dozens of scaffolds encompassing more than one mapped gene were identified. From these, the relationship between genetic and physical distances was examined and genome-wide recombination rate was found much smaller than most estimates reported for angiosperm genomes. This gene linkage map shall assist the large-scale assembly of the next-generation white spruce genome sequence and provide a reference resource for the conifer genomics community. 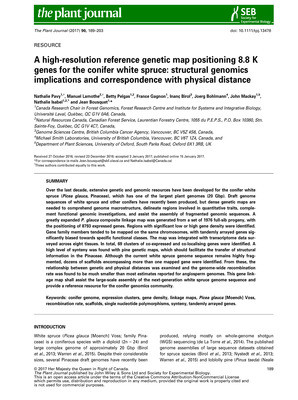