This study suggests that a group of specialized proteins (effectors) produced by the European poplar rust fungus attack specific host cell components in order to facilitate the fungus’s proliferation.

As with numerous fungal diseases, the European poplar rust fungus injects effectors into the cells of its host in order to weaken its defence mechanisms and divert resources to its own use. The purpose of this study was to assess the ability of certain effectors produced by the rust fungus to promote its own proliferation, thereby increasing its virulence in poplar.

Studying these effectors makes it possible to gain a better understanding of the interactive mechanisms existing between trees and microbes, taking the poplar as a model system to better assess potential damage that may be caused by exotic pests. 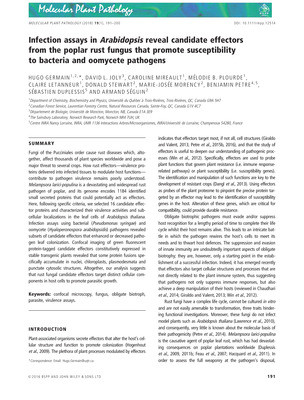