Detailed understanding of forest disturbance interactions is needed for effective forecasting, modelling, and management. Insect outbreaks are a significant forest disturbance that alters forest structure as well as the distribution and connectivity of combustible fuels at broad spatial scales. The effect of insect outbreaks on fire activity is an important but contentious issue with significant policy consequences. The eastern spruce budworm (Choristoneura fumiferana) is a native defoliating insect in eastern North America whose periodic outbreaks create large patches of dead fir and spruce trees. Of particular concern to fire and forest managers is whether these patches represent an increased fire risk, if so, for how long, and how the relationship between defoliation and fire risk varies through space and time. Previous work suggests a temporary increase in flammability in budworm-killed forests, but regional and seasonal variability in these relationships has not been examined. Using an extensive database on historical lightning-caused fire ignitions and spruce budworm defoliation between 1963 and 2000, we assess the relative importance of cumulative defoliation and fire weather on the probability of ignition in Ontario, Canada. We modeled fire ignition using a generalized additive logistic regression model that accounts for temporal autocorrelation in fire weather. We compared two ecoregions in eastern Ontario (Abitibi Plains) and western Ontario (Lake of the Woods) that differ in terms of climate, geomorphology, and forest composition. We found that defoliation has the potential to both increase and decrease the probability of ignition depending on the time scale, ecoregion, and season examined. Most importantly, we found that lagged spruce budworm defoliation (8–10 yr) increases the risk of fire ignition whereas recent defoliation (1 yr) can decrease this risk. We also found that historical defoliation has a greater influence on ignition risk during the spring than during the summer fire season. Given predicted increases in forest insect activity due to global change, these results represent important information for fire management agencies that can be used to refine existing models of fire risk.

There is debate in the scientific community about what impact insects like spruce budworm have on forest fire activity. This study examined how the defoliation of trees by eastern spruce budworm changes the probability of fire ignition in a region. We combined Ontario’s spatially-detailed historical weather, fire and tree defoliation data. The ultimate death of trees in forests due to accumulated spruce budworm damage transforms the structure of forest fuels over time. We found that immediately ( 1 year_) after mortality of a stand due to spruce budworm attack the risk of lightning fire can be reduced. However 8 to 10 years after that stand mortality the change in fuel structure can lead to an increase in the risk of fire ignition. Insect defoliation was also found to have a greater influence on potential fire ignition during the spring. 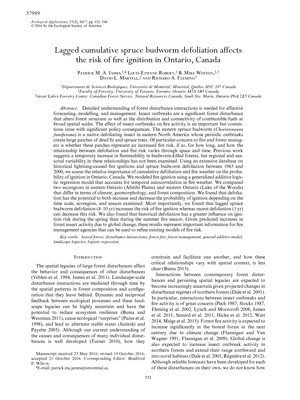