The 2015 Paris Agreement reinforces the importance of the land sector and its contribution to greenhouse gas (GHG) reductions. Thus, there is growing interest in improving estimates of the GHG balance in response to land-use changes (LUCs) involving agriculture and forestry, for national-scale reporting, and for carbon (C) offsets. Large agricultural areas in Europe, Russia and North America are reverting to forest, either naturally or through planting, after abandonment of agricultural land, and this trend may have a substantial impact on carbon budgets. We report results of a pilot project in the Mixedwood Plains ecozone of eastern Canada to analyze the change in the C budget on a landscape over 15 years on abandoned cropland where woody vegetation is regenerating. Thirty-six plots (2 km x 2 km) with paired aerial photographs taken circa 1994 and circa 2008 at a scale of 1:10,000 or larger were randomly selected from the 20 km x 20 km National Forest Inventory (NFI) grid. A spatially-explicit version of the Carbon Budget Model of the Canadian Forest Sector (CBM-CFS3) was used to estimate impacts of LUC on C stocks and fluxes. Polygons identifying areas of LUC within each photo plot were delineated, classified, and evaluated to provide input data for the model. The rate of C accumulation in our study area was found to be relatively constant over the entire simulation period, at 1.07 Mg C/ha/yr. Abandoned agricultural land reverting to woody lands could play an important role in regional and national C sequestration in Canada, but more research is required to quantify the areal extent of this LUC.

The way land is used can have a big effect on the amount of greenhouses gasses, such as carbon dioxide, that are moved from the land to the atmosphere. For this reason, there is a lot of interest in finding out how much the change between land used for agriculture and forestry, or agricultural land that is abandoned and becomes wooded land, affects the distribution of carbon between the land and the atmosphere. We used a computer model that can calculate the changes in carbon every year, in a pilot study area in Ontario where agricultural land is often abandoned and becomes wooded land. We represented space in the model using a 2 km X 2 km grid and modeled the changes over l0 years. We found that decisions made about how to model the year of land-use change affected results early in the 10-year period, but not later in the 10-year period. We found that carbon accumulated in the abandoned agricultural land when it returned to woody land. This could be one low-cost approach to help reduce the amount of greenhouse gasses being transferred from land to the atmosphere. 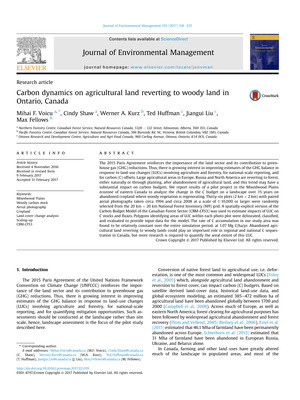