The growth response of trees to ongoing climate change has important implications for future forest dynamics, accurate carbon accounting, and sustainable forest management. We used data from black spruce (Picea mariana) and jack pine (Pinus banksiana) provenance trials, along with published data for three other northern conifers, to identify a consistent growth response to climate warming in which cold-origin populations are expected to benefit and warm-origin populations are expected to decline. Specifically, populations from across the geographic range of a species appear to grow well at temperatures characteristic of the southern portion of the range, indicating significant potential for a positive growth response to climate warming in cold-origin populations. Few studies have quantified and compared this pattern across multiple species using provenance data. We present a forest regeneration strategy that incorporates these anticipated growth responses to promote populations that are both local to the planting site and expected to grow well under climate change.

Understanding the impacts of climate change on tree growth is critical for sustainable forest management. Provenance trials provide key data for addressing this topic, but early efforts in employed transfer functions, which may not address how extant populations will respond to climate change. We present a forest regeneration strategy that incorporates range position considerations to promote populations that are both resilient to climate change and local to the planting site. We found evidence that northern conifers exhibit a temperature optimum – a temperature at (or near) which all populations appear to grow best. This temperature optimum was associated with temperatures characteristic of the far southern portion of each species’ geographic range. Given the existence and positioning of these optima, southern populations are expected to show growth declines under climate change, while northern populations are expected to benefit. When planting a new forest, seeds from northern populations that are local to the planting site could be used as a low risk approach for promoting climate change resiliency in the resulting plantation. 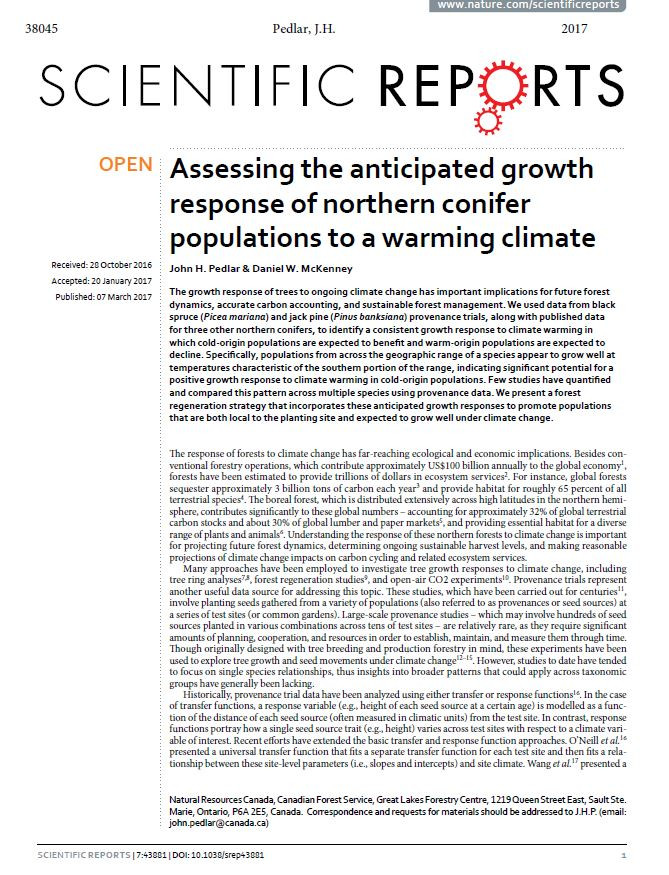