Mulching of forest fuels is a vegetation management practice commonly applied in the wildland urban interface to mitigate the risk of wildfire. This experimental fire at the Red Earth Creek FireSmart research area was designed and conducted to document how two different mulch fuel treatments modified fire behaviour when challenged by an approaching crown fire.

The two fuel treatments applied at the Red Earth Creek study site included mulch thinning and strip mulching. We ignited a strip of natural black spruce forest upwind of these treatments to observe and document changes in fire behaviour as crown fire encountered the mulch treatments. The mulch thinning treatment modified crown fire to high-intensity surface fire. With a greater volume of crown fuels available, the strip mulch treatment maintained intermittent crown fire behaviour with crown-to-crown fire spread across mulched strips. In both treatments, fine chipped debris and feathermoss in the surface layer and aerial lichen in standing stems provided an abundance of ignition receptors for spot fire propagation. With varying wind speeds throughout the experimental fire, the rate of spread in the treated areas ranged between 14 and 29 m/min. Calculated head fire intensity with wind variations ranged between 13,440 and 27,840 kW/m.

The Red Earth Creek experimental fire was conducted under conditions of severe fuel moisture deficit with temperature/relative humidity crossover and moderate wind conditions. The hourly ISI (15.7) at the time of ignition was at the 98th percentile. The historical 90th percentile BUI value was 64 while the BUI on May 14 (50.9) was at the 83rd percentile. These factors contributed to volatile fire behaviour in the ignition zone in the natural stand, which tested the potential limits of a fuel treatment of this type. This case study of fire behaviour in mulched fuel treatments at extreme fuel and weather conditions does not address the effectiveness of fuel treatments in other fuel types under different weather conditions.

Portions of the vegetation in forests adjacent to communities are often mulched to reduce the risk of wildfire. We evaluated the effectiveness of different mulching treatments in reducing the intensity and rate of spread of crown fires (fires that spread from treetop to treetop) in black spruce tree stands. We applied 2 types of mulching to blocks of the Red Earth Creek FireSmart research area in central Alberta: a strip mulch treatment and a mulch thinning treatment. We then ignited a strip of natural black spruce forest upwind of these treatment blocks. Strip mulching had a limited effect on the intensity and rate of spread of the fire. The fire behaviour in the block where mulch thinning had been done was influenced by the fire in the adjacent block that had received the strip mulch treatment, and therefore we were not able to draw a conclusion about the effectiveness of this treatment. A notable effect of mulching was to create additional fuel on the forest floor, which contributed to fire intensities that may have been difficult to control with direct ground attack. We plan to modify our fuel management tactics to try to improve their effectiveness at reducing the intensity and rate of spread of forest fires. 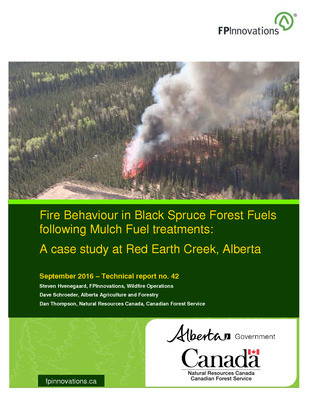