This study tested the relative suitability of P. sylvestris, P. resinosa, P. banksiana, and P. strobus) as hosts for S. noctilio in a controlled, in situ experiment. In a mixed pine forest in northern Ontario, we caged S. noctilio mating pairs to 10 freshly cut pine logs of each species, and estimated oviposition, counted adult S. noctilio (F1 generation) that emerged from logs, and calculated survivorship from egg to adult. Pinus sylvestris and P. resinosa were optimal hosts according to all three metrics of S. noctilio performance. Pinus strobus was a suitable larval host, but was not perceived as such by females, as evidenced by lower oviposition. Pinus banksiana was perceived as a suitable host by females, but was the least suitable larval host. Our results suggest that P. sylvestris and P. resinosa are more suitable hosts than P. strobus and P. banksiana for S. noctilio in eastern North America. 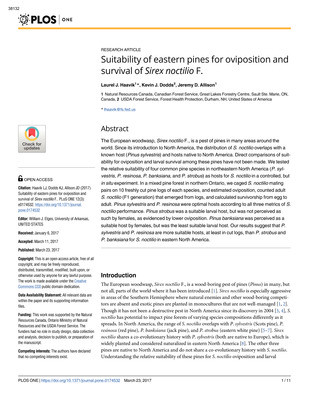