Global demand for forest biomass feedstock has increased drastically in recent years, mainly due to the implementation of policies and strategies for climate change mitigation and renewable energy production in many jurisdictions. The biomass from dead trees has been recognized by the International Panel on Climate Change (IPCC) as a promising source of forest biomass for bioenergy at the global scale both because of its wide scale availability and its potential to limit global warming. In eastern Canada, dead trees are not only very abundant but are also widely perceived by lumber and pulp and paper producers as contaminants in the wood supply chain with marginal profitability. The general aim of this study was to determine the conditions of profitability of an eastern Canada independent sawmill (i.e., unaffiliated with a pulp plant) to produce pellets destined for international export using either co-products or roundwood from dead trees as feedstock. We compared the yield and monetary value of dead trees at various sizes and degradation levels for the production of wood pellets, alone or in conjunction with the production of lumber, to current market conditions. Our results suggest that using dead trees for lumber and pellets is almost as profitable as using them for lumber and pulp, with a difference of about 1–12% depending on tree size. Dead trees from all classes of wood degradation could serve as an interesting feedstock for pellets because wood density was only slightly affected by wood degradation. Small dead trees (DBH < 15 cm) could serve for all scenarios, as the difference between revenues and costs remained generally minimal between them. Larger dead trees did not appear to represent a financially viable option under current market prices, unless suitable subsidies or other types of financial support are provided. The sustainability criteria applied by European consumers could therefore be a determining factor for the future importance of dead trees from eastern Canada as a source of feedstock for wood pellet production.

The results of this study show that under current conditions, for an independent sawmill located in eastern Canada:

• the difference in profits between producing in sawing, shavings or pellets is minimal when using small dead conifers with a diameter at breast height of less than 15 cm;

The purpose of this study was to determine the conditions conducive to achieving profitability in the production of pellets from dead wood (roundwood or logging residues). This assessment was performed based on a sawmill with no affiliation to a pulp and paper mill, which wanted to export pellets to Europe.

In the current context, an increase in the use of whole dead trees to produce wood pellets does not appear to be very likely without government financial assistance. However, the criteria for environmental governance established by the European community on issues of sustainable forest management could stimulate the use of dead trees in Canada since they are considered a source of ecological biomass for energy production. 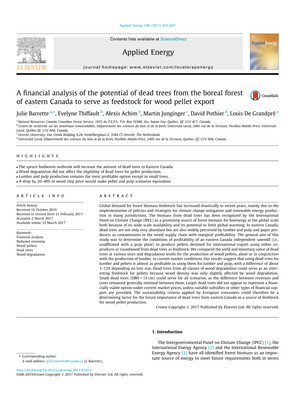