Here, we analyze the current spaces for public participation in Crown (public) land management through a comparative study that focuses on the Canadian provinces of New Brunswick and Nova Scotia. We define spaces for public participation as opportunities for meaningful public involvement in the decision-making arena of forest management. We examine the experiences of public participation in these provinces in an exploratory study comparing perceptions of participatory processes and outcomes of the processes in these two provinces based on 15 years (1999–2014) of informant experience. The objective is to understand more fully the barriers and bridges to meaningful public participation and relate these perceptions to on-the-ground implementation. A primary goal is to understand how, over time, processes with unsatisfying outcomes shape the perceptions of the participants. Rather than focusing on one particular participatory process, this comparative study assesses participation over time to identify the limitations in the participatory environments of these two provinces. We take a qualitative research approach using semistructured interviews with 42 forestry stakeholders, combined with participant observation and document analysis. This research reveals: (1) the importance of historical and cultural context as ongoing power imbalances shape the current dialogue and spaces for participation; (2) periods of robust and sound attempts at public participation in both provinces, with disappointments in implementation giving rise to a sense of futility, a closed system, and mistrust of government and industry over time; (3) a system of privileged access in opposition to the ideals of deliberative democracy and an equitable decision-making process; (4) in New Brunswick, public land policy implementation that is not reflective of participatory processes or of interests outside government and industry; (5) in Nova Scotia, recent efforts to incorporate values outside the government-industry policy realm, demonstrating an attempt to shift toward a more collaborative system for public land management.

This study analyzes the role of public participation in the management of public forests based on a comparative study of the provinces of New Brunswick and Nova Scotia over a 15-year period. The purpose is to gain a better understanding of the obstacles preventing the public from participating in a significant manner and those hindering the optimal implementation of public participation. Interviews were conducted with 42 forestry sector stakeholders.

The study brings up five main observations about public participation: 1) It is important to describe the historical and cultural context to those participating in the process, as the power imbalances in place shape the dialogue and have an impact on the importance given to their participation; 2) the respondents emphasized their disappointment in the process, even saying it was a futile, closed system, operating in a climate of distrust created towards the government and the forest industry; 3) certain stakeholders get special access to the process under the present system; 4) in New Brunswick, the implementation of policies governing the management of public lands does not reflect the process of public participation or the interests of those outside the government and the industry; 5) in Nova Scotia, efforts have recently been made to incorporate goals other than those of the government and the industry, thus showing a willingness to move towards a more collaborative system. 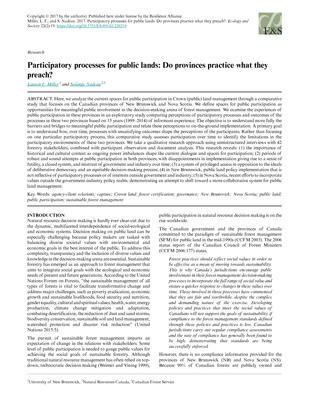