A tree species effect on soil that is consistent across the species’ range: the case of aspen and soil carbon in North America. 2017. Laganière, J.; Boča, A.; Van Miegroet, H.; Paré, D. Forests 8: 113.

Trembling aspen covers a large geographic range in North America, and previous studies reported that a better understanding of its singular influence on soil properties and processes is of high relevance for global change questions. Here we investigate the potential impact of a shift in aspen abundance on soil carbon sequestration and soil carbon stability at the continental scale by conducting a systematic literature review using 23 published studies. Our review shows that aspen’s effect on soil carbon is relatively consistent throughout the species range. Aspen stores less C in the forest floor but similar amounts in the mineral soil relative to conifers. However, a robust set of indicators of soil C stability, for example, degree of organo‐mineral associations, proportion of readily‐available or labile C estimated during long‐term soil incubations or using hot‐water extraction, pattern of soil C distribution, and temperature sensitivity of soil heterotrophic respiration, reveals that the soil organic carbon (SOC) stock under aspen is more stable, rendering it more protected against environmental changes and soil disturbances. Therefore, our continental‐scale analysis highlights that an increase in the abundance of trembling aspen in North American forests may increase the resistance and resilience of soil C stocks against global changes.

The results of this study indicate that an increase in the quantity of trembling aspen in North American forests could be beneficial to the conservation of soil carbon stocks in response to climate change.

The goal of this study was to assess the potential impact of variance in the abundance of trembling aspen in North American forests on the quantity and stability of carbon sequestered in the forest soil. To do so, the researchers conducted a review of the scientific literature.

As a pioneer species, trembling aspen has developed highly efficient adaptive mechanisms, and its geographical distribution in North America is quite vast. A better understanding of the species’ impact on soil characteristics and on the processes taking place within the soil is quite relevant in the context of climate change, and could be particularly useful for the development of mitigation measures through forest management. 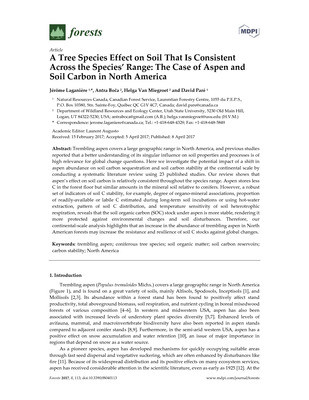