High throughput sequencing technologies have revolutionized the potential to reconcile incongruence between gene and species trees, and numerous approaches have been developed to take advantage of these advances. Genotyping-by-sequencing is becoming a regular tool for gathering phylogenetic data, yet comprehensive evaluations of phylogenetic methods using these data are sparse. Here we use multiple phylogenetic and population genetic methods for genotyping-by-sequencing data to assess species relationships in a group of forest insect pests, the spruce budworm (Choristoneura fumiferana) species complex. With few exceptions, all methods agree on the same relationships, most notably placing C. pinus as basal to the remainder of the group, rather than C. fumiferana as previously suggested. We found strong support for the monophyly of C. pinus, C. fumiferana, and C. retiniana, but more ambiguous relationships and signatures of introgression in a clade of western lineages, including C. carnana, C. lambertiana, C. occidentalis occidentalis, C. occidentalis biennis, and C. orae. This represents the most taxonomically comprehensive genomic treatment of the spruce budworm species group, which is further supported by the broad agreement among multiple methodologies.

This study compared various approaches used to assess the relationships between species in the conifer budworm group, including the spruce budworm. It promotes the use of markers obtained through genome-wide sequencing. With the use of these markers, the relationships between the different species of budworm present in North America were studied with a ground-breaking level of precision.

Most methods arrive at comparable results for this insect species complex. However, contrary to what was suggested by earlier studies, the jack pine budworm – not the spruce budworm – appears to be the ancestor of the group. The study further shows a close relationship between the western species of budworm, all of which appear to share a common ancestor in the Choristoneura retiniana budworm.

This work illustrates the importance of using data from multiple sources in resolving issues regarding species identification within complex families. 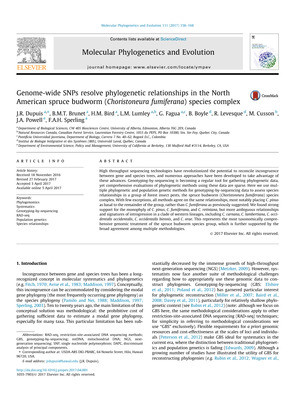