Litter decomposition is a major driver of carbon (C) and nitrogen (N) cycles in forest ecosystems and has major implications for C sequestration and nutrient availability. However, empirical information regarding long-term decomposition rates of foliage and wood remains rare. In this study, we assessed long-term C and N dynamics (12–13 years) during decomposition of foliage and wood for three boreal tree species, under a range of harvesting intensities and slash treatments. We used model selection based on the second-order Akaike’s Information Criterion to determine which decomposition model had the most support. The double-exponential model provided a good fit to C mass loss for foliage of trembling aspen, white spruce, and balsam fir, as well as aspen wood. These litters underwent a rapid initial phase of leaching and mineralisation, followed by a slow decomposition. In contrast, for spruce and fir wood, the single-exponential model had the most support. The long-term average decay rate of wood was faster than that of foliage for aspen, but not of conifers. However, we found no evidence that fir and spruce wood decomposed at slower rates than the recalcitrant fraction of their foliage. The critical C:N ratios, at which net N mineralisation began, were higher for wood than for foliage. Long-term decay rates following clear-cutting were either similar or faster than those observed in control stands, depending on litter material, tree species, and slash treatment. The critical C:N ratios were reached later and decreased for all conifer litters following stem-only clear-cutting, indicating increased N retention in harvested sites with high slash loads. Partial harvesting had weak effects on C and N dynamics of decaying litters. A comprehensive understanding of the long-term patterns and controls of C and N dynamics following forest disturbance would improve our ability to forecast the implications of forest harvesting for C sequestration and nutrient availability.

In this study, the researchers assessed the long-term (12-13 years) dynamics of carbon and nitrogen during the decomposition of foliage and wood from three tree species of the boreal forest according to different harvesting procedures and levels of intensity. A number of different decomposition models were used.

The models proved to be accurate in determining carbon loss from the foliage and wood of trembling aspen, white spruce and balsam fir. The long-term decomposition rate following a clearcut was similar to or faster than the rate observed in unmanaged stands according to litter composition, tree species and harvesting residues. Partial cutting had little effect on carbon and nitrogen dynamics.

A greater overall understanding of the long-term models of carbon and nitrogen dynamics following forest disturbances may help improve our ability to predict the impact of forest harvesting on carbon sequestration and nutrient availability. 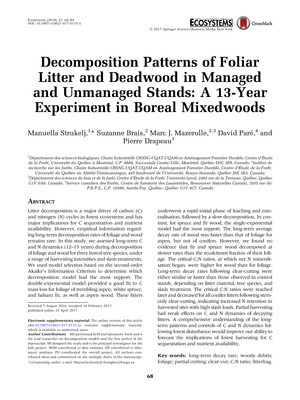